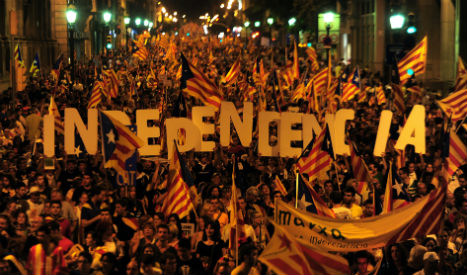 Spain's conservative government filed an appeal Wednesday with the Constitutional Court to try to invalidate a resolution passed by Catalonia's parliament that declared the start of a secession process.

Prime Minister Mariano Rajoy said his government had asked the court to “immediately suspend this resolution and all of its effects.”

If the court accepts the lawsuit, which could happen as soon as Wednesday, the resolution will be immediately frozen while judges consider legal arguments.

Spain's central government also asked the court to “personally” notify Catalonia's outgoing president, Artur Mas, his cabinet and the president of the regional assembly, Carme Forcadell, of the consequences they could face if they ignore the court's orders.

Separatist Catalan lawmakers approved a text on Monday which calls on the regional assembly to start working on legislation within 30 days to create a separate social security system and treasury, with a view to completing independence in 18 months.

The resolution “solemnly declares the launch of the process of creating a Catalan state in the form of a Republic.”

It has the backing of Mas' Together for Yes coalition and the smaller far-left separatist CUP party, which together won a majority in the Catalan parliament for the first time in a September 27th regional election.

While Catalan separatist parties won a majority of seats in the regional parliament in the polls, they failed to win a majority of all votes cast – a fact emphasised by the central government in Madrid.

Rajoy said the promoters of the Catalan resolution want to “put an end to democracy and the state of law, subjugate the rights and freedoms of all citizens and break up the unity of Spain.”

“I will not allow it and I have the backing of the majority of Spaniards,” he told a news conference following an emergency cabinet meeting held as he gears up for a December 20th general election.

Catalonia, a region of 7.5 million people with its own language, that accounts for a fifth of Spain's economic output, already enjoys a large degree of autonomy in education, health and policing.

Rajoy met earlier on Wednesday with the head of the main opposition Socialists, Pedro Sanchez, who reiterated that he backed the prime minister in his defence of “the constitution and legality”.

The challenge laid down by Catalan separatists was “extremely serious”, Sanchez added during an interview with private television Telecinco.

But at the same time he accused Rajoy's government of “inaction” in the face of the separatist challenge and reiterated his call for a reform of the constitution to make Spain a federal state as a way to meet Catalonia's demands for more autonomy.

While the government prepared its lawsuit, public prosecutors released an 11-page report that said the promoters of the Catalan resolution could face criminal charges of “sedition” and “disobedience”.

The report said that those found guilty of sedition could be face a jail term of up to 15 years.

The Constitutional Court will begin examining the government's appeal of the resolution  at 4:30 pm a judicial source said.

Catalonia tried to hold an official referendum on independence last year, but the Constitutional Court ruled it was against the constitution, arguing that all Spanish people have the right to decide on matters of sovereignty.

The region pressed ahead anyway and held a symbolic vote. Over 80 percent of the participants (2.3 million) voted in favour of independence.