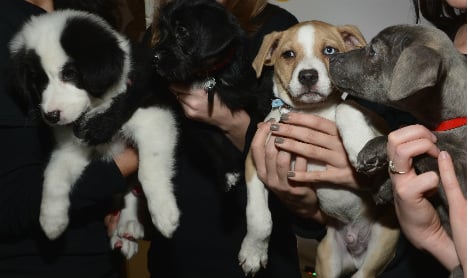 Madrid will follow in the footsteps of Catalonia to become the second of Spain’s semi-autonomous regions to operate a ‘no kill policy’ after a long campaign led by Madrid animal rescue centre El Refugio.

Up until now, municipal dog pounds could euthanize cats and dogs if they were not claimed or rehomed within ten days.

But the new leglislation expressly prohibits the sacrifice of dogs and cats except for humanitarian reasons, or if they pose a danger to public health.

“Since 2004 more than 30,000 healthy dogs have been put down because of the mere fact that they were abandoned,” said Nacho Paunero, the president of El Refugio.

“We have spent many years denouncing these practices and now want to take it forward on a national level,” he said.

The draft law supported by Madrid's Popular Party regional president Cristina Cifuentes (above) now only needs to be approved by Madrid’s regional parliament,

It also strengthens animal protection legislation defining animal abuse as causing pain, suffering or inflicting unnecessary stress, either by action or omission, on an animal.

It also makes it illegal to leave a dog in a parked vehicle without adequate ventilation or in unsuitable temperatures and prohibits leaving them tied up in a way that could cause suffering or injury.

The law also prohibits pet outlets from displaying animals in shop windows and clamps down on unauthorized breeders.

There are an estimated 800,000 stray dogs waiting for adoption in shelters across Spain, according to the European Society of Dog and Animal Welfare and around 20 animal shelters operating within the region of Madrid itself.

Spain is way behind Italy which outlawed the euthanasia of healthy companion animals since 1991 and instead controls stray populations through trap, neuter and return programs.

In the UK, there is no law governing the euthanasia of animals. The British charity Dogs Trusts states that “no mentally and physically healthy dog taken into the protection of the rescue/re-homing centres shall be destroyed”, while the RSPCA has said it plans to end the euthanasia of any rehomeable animal by 2017.