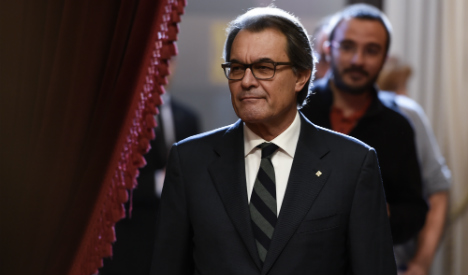 Mas and  the 'Junts pel Si' – Together for Yes – alliance, won 62 seats in September elections but needed the pro-secessionist radical left CUP and its ten seats to form a majority.

But the anti-capitalist CUP party refused to support Mas as President in the first round of voting on Tuesday evening, calling instead for an independent candidate untainted by corruption and austerity cuts to lead Catalonia towards independence.

The party of Mas is currently embroiled in a graft probe that many see as the main obstacle to his reinstatement as premier.

CUP insiders said the preferred candidate would be Raül Romeva, who led the list for the Junts pel Si coalition but who has said he wants only to broker a deal, rather than lead himself.

Using his Twitter account, Romeva insisted: “I am not a candidate. My role is to work towards an agreement.”

Lawmakers in Catalonia officially started a process Monday to secede from Spain by 2017 in an unprecedented showdown with Madrid, after a parliamentary majority voted for a pro-independence resolution.

The text calls on the regional assembly to start working on legislation to create a separate social security system and treasury, with a view to complete independence within 18 months – a move that Rajoy immediately challenged.

Responding to the resolution, Rajoy said his government would on Wednesday go to the Constitutional Court, which can suspend the text and take sanctions against those who do not respect its ruling.

Artur Mas will face a second chance on Thursday when the parliament votes for a second time.