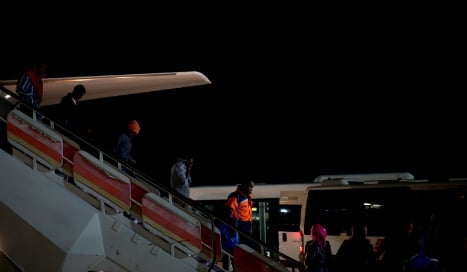 The refugees arrived in Madrid on Sunday. Photo: Interior Ministry

Just a dozen refugees stepped off a plane at Adolfo Suarez Madrid-Barajas airport on Sunday, in a long anticipated pilot scheme aimed at relocating and distributing fairly across Europe the tens of thousands of people who have arrived in Italy and Greece.

But as the group, comprising eight men and four women, arrived on a flight from Rome to begin their new lives in Spain, Spanish NGO’s questioned why it had taken so long for the first refugees to arrive in a crisis that reached emergency proportions.

“We are very pleased to have started this process and to welcome the first refugees to Spain for resettlement, but this is just a tiny drop of relief in an ocean of delays, bargaining and stop gap solutions,” said Estrella Galán, the director of Spanish Commission for Refugee Aid (CEAR).

The NGO questioned why it had taken so long to approve a pilot scheme and why so few people were being sent to Spain.

“The process has been desperately slow and clearly insufficient to deal with the mounting crisis,” said Galán.

After initially refusing to accept a mandatory quota agreement from the EU, Spain’s government said in early September that it would accept 14,931 refugees bowing to public pressure within Spain that the nation should shoulder its share of the burden.

Public campaigns were launched across Spain calling on the government to accept more refugees and hundreds of councils have measures in place to welcome refugees risking their lives to reach Europe. A survey at the end of October revealed that the majority of Spaniards believed their nation should be doing more for refugees, in contrast to those in France, Holland and the United Kingdom, where majorities felt their nations had reached the upper limits when it came to migrant intake.

The 12 people who arrived from Italy on Sunday will be sent to different parts of the country for resettlement. The arrivals consist of eleven Eritreans and just one Syrian.

“Several humanitarian organizations involved in the resettlement project in different parts of Spain will ensure that their basic needs are met,” said a statement from the Interior Ministry.

“They will be provided with health care, food, education and offered integration programmes, such as langague learning and training to enter into the workplace as per guidelines set out by the European Union.”

The NGO CEAR said that the process of relocation was taking such a long time that “many refugees are being forced into taking their owns steps at relocation”.

“We call on the Spanish Government to propose accelerating the next transfer of refugees to avoid more tragedy,” said the group in a statement.

Spain has said it plans to resettle a total of 854 asylum seekers before the end of 2015.