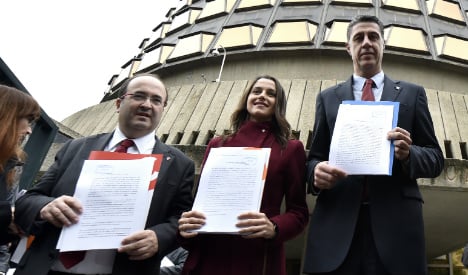 The leaders of the Socialists, Ciudadanos and the Popular Party in Catalonia filing their appeals. Photo: AFP

The court announced its decision to allow the debate – due to be held on Monday – to go ahead after three opposition parties lodged an appeal.

The court accepted the appeals made by Ciudadanos, the Popular Party and the Socialist Party, but refused to suspend Monday’s session, arguing that parliament was the “natural place for a political debate” according to El País.

“The eventual result of the debate should not effect the viability of the debate in advance,” the court added, saying that is why it could not suspend the session.

While the court has refused to block Monday’s debate, it will examine the appeals lodged by the three major anti-independence parties.

Ciudadanos, the Popular Party and the Socialists argue that debating the bill on Monday contravenes Article 23 of the Constitution, which concerns active participation.

The central government in Madrid has already announced that it will challenge the motion once it is passed, which would mean an automatic suspension.

Spanish Prime Minister Mariano Rajoy has been meeting with the leaders of Spain’s other major parties, including for the first time with Podemos leader Pablo Iglesias, in an attempt to draw up a coordinated response to the Catalan independence challenge.

Catalan separatist parties are keen to push through a motion in the regional parliament that would pave the way for the independence process in the northeastern Spanish region.

Pro-separatist parties won a majority in the recent regional elections, which they billed as a de facto vote on independence.