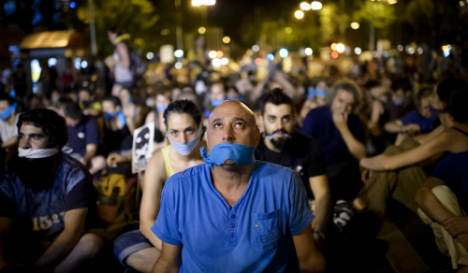 They added that the EU country's next government should ensure that any legal reforms are done “with due regard to the danger of a chilling effect on freedom of expression.”

The call was made in a report issued Thursday by the Vienna-based IPI, the Committee to Protect Journalists (CPJ), the European Federation of Journalists (EFJ) and the Madrid-based Platform in Defence of Free Expression (PDLI).

The groups visited Spain in June for talks with senior officials prompted by a series of measures by Prime Minister Mariano Rajoy's that critics said endangered freedom of expression.

The report concluded that the measures, including in particular the Public Security Law, “harbour evident dangers for the free flow of information in the public interest”.

That legislation, dubbed the “gag law” by opponents, took effect in July and punishes with “hefty fines” the unauthorised use of images of police and the failure to show due respect to officers, amongst other things, the report said.

It was put forward during unprecedented public protests against austerity cuts that involved clashes between police and demonstrators as well as alleged instances of police aggression against journalists, it said.

Drawn up by Rajoy's ruling conservative Popular Party government, the law also sets fines of tens and sometimes hundreds of thousands of euros for unauthorised protests outside parliament and places such as nuclear power plants.

It has been “strongly criticised” by all of Spain's major journalist associations, the Madrid Bar Association, the General Association of Spanish Bars, the UN Human Rights Committee, five UN human rights rapporteurs and major international media outlets, the IPI said.

“We strongly urge whichever party or parties that will form the next Spanish government to take into account the relevant criticism both from within Spain and abroad, and to adopt the recommendations in this report,” said the IPI's Martha Steffens, who led the mission.