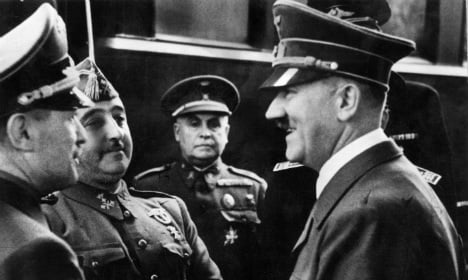 Around €100,000 ($109,000) of German tax-payers’ money is paid to former combatants, their widows and orphans each year, according to left-wing political party Die Linke, who tabled a question in the Bundestag, Germany's national parliament.

“It’s an absolute disgrace to think the German government is still paying out to Nazi volunteers,” MP Jon Iñarritu of the left-wing Basque party Amaiur, told The Local.

“It doesn’t make sense, contravenes EU law and serves to humiliate victims of fascism,” he said.

“It was my understanding that Germany had a completely different attitude when it came to historical memory and the rejection of fascism.”

More than 47,000 Spaniards signed up to the Division Azul – Blue Division – to join Nazi troops fighting communism on Germany’s eastern front between 1941 and 1944.

A pension agreement was struck by General Franco with the Federal Republic of Germany in 1962 that saw the Blue Division combatants, their widows and orphans receive a pension from the state. In return, Spain agreed to pay a stipend to the widows of fallen airmen of Hitler’s Condor Legion, who bombed Spain during the Civil War of 1936 and 1939 and most famously carried out the bombardment of the Basque town Guernica.

But Die Linke questioned whether it was appropriate for Germany to still be paying out to the Division Azul. Last year the figure amounted to €107, 352 split between 41 veterans, eight widows and an orphan.

“It’s a scandal that nearly 70 years after the war ended Germany continues to pay more than €100,000 per year to Nazi collaborators,” said Andrej Hunko of Die Linke, reported the Basque newspaper Gara.

“These people voluntarily joined the German fascists in a war of extermination in Eastern Europe and it is incomprehensible that the German government continues these payments while so many war victims are still waiting for their rightful compensation,” the German MP said.

The Basque pro-independence coalition party EH Bildu said they will bring up the issue at European Parliament on Friday.