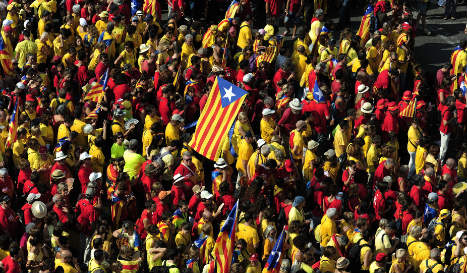 The move is largely symbolic as the court is not expected to give its opinion before the assembly launches the process.

In addition, the pro-independence camp has already said it does not recognise the tribunal's jurisdiction.

Pro-independence parties in the wealthy northeastern Spanish region want the resolution to be the formal launch of a process to secede from Spain and set up a new republican state within 18 months.

The motion, due to be put to the Catalan parliament in Barcelona on Monday, calls on the regional assembly to start working on legislation within 30 days to create a separate social security system and treasury.

The separatists won a majority of seats in the 135-seat Catalan parliament in Barcelona for the first time in elections on September 27th.

But the pro-independence camp won less than half of the vote the elections, raising questions over the legitimacy of their latest separatist push.

The leaders of the Catalan branches of the conservative Popular Party, which governs at the national level, the Socialists and the centre-right Ciudadanos party filed separate appeals against the resolution at the
Constitutional Court in Madrid.

The Catalan Popular Party leader, Xavier Garcia Albiol, said the goal was to “defend the rights of Catalans who feel Spanish and to defend ourselves before an act of tyranny.”

The leader of the Catalan Socialists, Miquel Iceta, said the separatist parties' plan would “trample on rights and freedoms” and violate Spanish laws.

“We ask that the Catalan parliament… not be allowed to approve a resolution that would leave Catalonia on the sidelines of democratic legality in this country,” added Ines Arrimadas of Ciudadanos.

Prime Minister Mariano Rajoy reiterated his warning that if the Catalan regional assembly passes the bill, he will “the next day or within days” appeal to the Constitutional Court to have it annulled.

A majority of Catalans, 51 percent, oppose the separatist parties' plan to have the regional parliament announce the start of independence, a poll published in daily newspaper El Pais on Friday showed. Just 42 percent favoured the plan.

The poll also showed support for Catalan independence has slipped to 41 percent from 45 percent before the regional election.

Catalans' longstanding demands for greater autonomy have intensified in recent years, in tandem with the country's economic crisis.

Home to 7.5 million people, Spain's wealthiest region has its own widely spoken language and distinct culture.

The head of the Catalan regional government, Artur Mas, appeared in court last month in Barcelona for organising a symbolic independence referendum in Catalonia in November 2014 despite a ruling from the Constitutional Court that it was illegal.