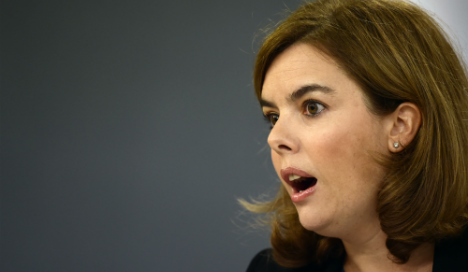 With the polls predicting a huge loss of seats for Spain's ruling conservative party of Mariano Rajoy in December, you might be forgiven for thinking that his deputy was preparing to be brought back down to earth with a bump.

In what may turn out to be a portent for the future, Rajoy's right hand woman found herself inches from disaster during  filming of a recent Spanish adventure television programme.

As the party campaigns for re-election, the deputy PM has shown that she is not afraid of a challenge, be it dancing on a prime time show or taking to the skies with a famous Spanish adventurer.

But while filming an episode of adventure show Planeta Calleja, a Spanish television programme presented by adventurer Jesús Calleja, the conservative politician ended up seconds from disaster when the hot air balloon they were travelling in lost control.

The incident occurred on October 17th when Sáenz de Santamaría was taking part in a challenge put to her by the show; to trace part of the famous Camino de Santiago pilgrimage route in a hot air balloon.

The balloon set off from León, but soon after take-off, Calleja realized the craft was not gaining sufficient height.

According to local website, Sport León, a few minutes after take-off the balloon began to descend in a “worrying manner”, heading towards a residential area on the outskirts of the city.

After requesting that emergency services be called, the adventurer – who has scaled the world’s seven highest peaks – managed to make an emergency landing.

He told crowds that the Deputy Prime Minister had “navigated better than me” during the incident.

He explained that the inclement weather conditions had made it impossible to control the balloon.

She is no stranger to dancing, whipping out her moves during the Seville Fair in April.