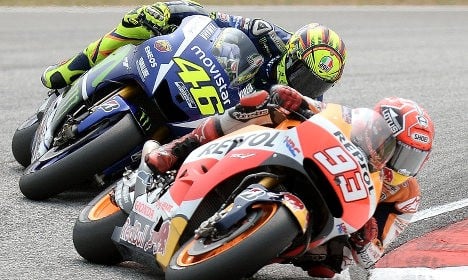 Rossi leads Yahama teammate Jorge Lorenzo by seven points heading into the final race of the season as he seeks an eighth premier category world championship.

However, the Italian may have to start from the back of the grid after kicking Marquez off his bike as a long-running war of words spilled over at the Malaysian Grand Prix last weekend.

Rossi is appealing the stewards' decision to sanction him by starting at the back of the grid to the Court of Arbitration for Sport with a final decision not expected until Friday.

Marquez was then also involved in a clash with two Italian journalists at his Catalan home in Cervera last week.

“It's been a difficult week after what happened in Sepang, but I've tried my best to put it behind me and concentrate on my training and looking forward to the final race of the season,” the Spaniard said in statement by his Honda team.

“We want to finish on a high note so we will work hard from Friday to get the bike set up well and give ourselves the best chance for the race.

“I've had mixed results here in the past but I enjoy racing here in front of the home fans. I hope the events of the past week can be put behind us and we can focus on the race.”