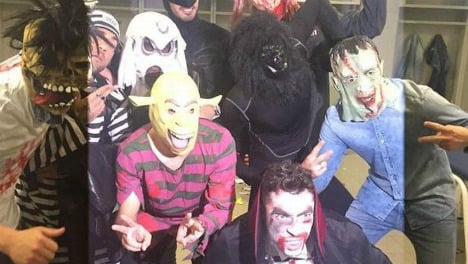 The group including Luis Suarez and Neymar burst in on Getafe midfielder Victor Rodriguez's press conference after Barca had beaten the Madrid side 2-0 on Saturday.

See the video of the press conference here:

“In no case was it our aim to offend or bother any colleagues in the Getafe team,” Barca said in a statement on Sunday.

“The interruption in the mixed zone which coincided with Victor Rodriguez's press conference was an unfortunate and involuntary coincidence for which we personally apologise and wish to express to him our respect.”

[VIDEO] Barça players celebrate Halloween after win over Getafe. Can you tell who is who? https://t.co/fdgahuLfIH pic.twitter.com/FxjwCXG5ag