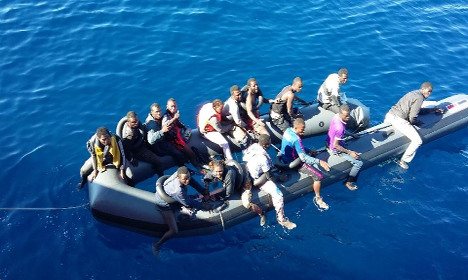 The stricken boat from which the 35 refugees are missing. Photo: Spanish Coast Guard/AFP

“The search has ended and it will not be resumed,” a coastguard spokesman said, a day after rescuers plucked 15 migrants alive from the remains of the boat and found the bodies of four others.

The coastguard began looking for the stricken boat after receiving a call on Wednesday from an NGO based in Morocco which warned that a vessel loaded with migrants had departed from a beach near Al Hoceima.

A coastguard vessel spotted the troubled boat just after midday on Thursday, some 39 nautical miles (72 kilometres) northwest of the town of Al Hoceima in northern Morocco.

Two women and 13 men were clinging to what was left of the boat, which had lost its hull. Some of the migrants did not have life jackets.

The 15 rescued migrants, who were transported by the coastguard ship to the southern Spanish port of Malaga, said there had been 39 other people on board who fell overboard.

It is the most serious migrant boat accident off the coast of Spain this year and it came as at least 17 children and nine adults drowned when three boats sank en route from Turkey to Greece.

The migrants on the boat were from the Ivory Coast, Nigeria, Mali, Guinea and Cameroon, said Helena Maleno of the NGO which first sounded the alarm, Caminando Fronteras.

A total of 12 women were on board the boat, including two who were pregnant and who are among the missing, she added.

“We learned of the departure of the boat because we received calls from family members of those on board,” Maleno told AFP.

The 15 surviving migrants were presented before a judge on Friday to begin the deportation from Spain without taking into account that “they just had a huge shock,” she added.

“They are people who have been displaced due to tragedy and conflict. They are not met with the respect of international conventions,” said Maleno.

“If they had been French victims of a bus accident in Spain, they would not be treated like this.”

This year alone, more than 3,000 people have died while trying to make the perilous journey to Europe across the Mediterranean. More than half a million people have made the voyage in Europe's worst migration crisis since World War II, most to Greece and Italy.