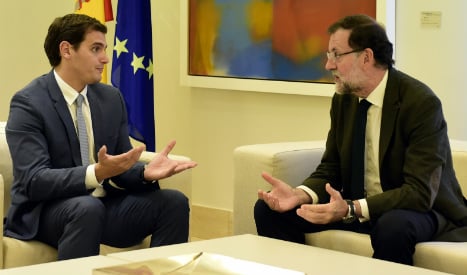 “I had the opportunity of putting forward the idea of a pact for Spain,” Ciudadanos leader Albert Rivera told a news conference after holding talks with the conservative prime minister.

Ciudadanos, which was formed in Catalonia to oppose separatism, came in second place in a regional election in Catalonia last month behind a coalition of separatists and polls show it could emerge as a king maker at the national level following a general election on December 20th.

“The idea is that Spaniards know that whatever parliamentary majority emerges (after the general election), Spain will not be in play,” Rivera added.

Rajoy is meeting with opposition leaders in a bid to craft a unified response to a Catalan separatist drive.

He met with the leader of the main opposition Socialists, Pedro Sanchez, on Thursday and will meet later on Friday with the head of new far-left party Podemos, Pedro Iglesias.

Rajoy ruling conservative Popular Party and the three other parties all want Catalonia to stay within Spain, although leftist Podemos has said it would support a referendum on the matter.

Catalan pro-independence parties announced on Tuesday they would pass a resolution in early November in the regional Catalan parliament calling on the chamber to announce the formal start of secession from Spain and the formation of a new republican state of Catalonia within 18 months.

The five-point national pact proposed by Rivera calls for the respect of “democratic laws” and the “territorial unity” of Spain as well as of the constitution, which can be amended but not replaced. It also bans alliances with parties that want to “break up Spain”.

But while they topped the poll, winning 72 seats, the pro-independence camp failed to win a majority of all votes cast — a fact emphasised by the central government in Madrid, which has fiercely resisted their push for independence.

Support for Catalan independence has slipped to 41 percent from 45 percent before the regional election, a poll published in top-selling daily newspaper El Pais showed on Friday.