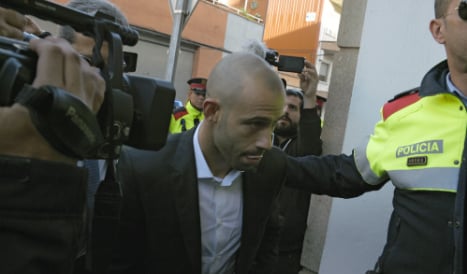 Mascherano arrived at the court in Gava, a coastal town on the outskirts of Barcelona where the player resides, at 0900 local time (0800GMT) accompanied by his lawyers.

His testimony before the court lasted barely five minutes as he recognised having committed the crime.

Spanish state prosecutors alleged the former West Ham and Liverpool midfielder failed to declare over €1.5 million in earnings in 2011 and 2012 by ceding his image rights to companies he owns in Portugal and the United States.

“Mascherano admitted the facts of the two counts of tax fraud, so there was no need to interrogate him,” said a judicial source.

The judge must now decide whether the case proceeds to trial.

However, given that player has admitted his guilt and paid the amount owed plus interest it is possible his defence and the prosecution will come to an agreement in the form of a fine before going to trial.

Mascherano is just the latest high-profile footballer to be scrutinised by the tax authorities in Spain over the declaration of money made through image rights.

Barcelona and Argentina teammate Lionel Messi will stand trial alongside his father for alleged tax fraud totalling €4.16 million relating to his image rights between 2006 and 2009.

Mascherano has also been in trouble on the field as he was handed a two-game ban on Wednesday for insulting the referee as he was sent-off in Barca's 3-1 win over Eibar last weekend.