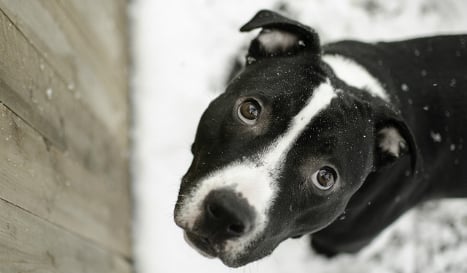 A photo of a healthy dog of similar breed. Photo: Rob Swatski / Flickr

Animal rights activists hope that the second jail sentence in less than a week for animal abuse is a sign of Spain changing its attitude when it comes to animal protection.

Andrés Feria Romero was behind bars on Wednesday serving time for leaving his dog to die of starvation while tied up outside his home in Mallorca.

His own brother had reported the animal abuse in April 2013 after discovering the pitbull terrier cross tied up on the patio of the house. It had no shelter from the sun or the rain  and was so emaciated that it was unable to stand up.

Despite being taken to a dog shelter by local police and cared for by veterinarians the poor creature died three days later.

In May, Feria Romero pleaded guilty to animal abuse and accepted a one-year jail sentence, with a view that it is usual to suspend sentences of less than two years for a first offence.

But Judge María Campos Barciela insisted that a custodial sentence was the only way to ensure that he didn’t just go out and get another dog and treat it the same way.

He lost his appeal to have the sentence suspended and was behind bars on Wednesday.

“In the privacy of his own home this man starved his dog and left him to die,” wrote Campos in her ruling at Penal Court number 8 in Palma.

“Starvation to the point of death is one of the cruelest tortures, it was a slow agonizing torture that lasted for months.”

Describing the dog as a “perrito” – little dog – the judge said it had “been found in a state of emaciation, starving, malnourished and ill. It was tied on a short leash in a courtyard with no ability to move, it could not run away to seek food or shelter from the cold.”

The judge pointed out that Feria Romero could have taken the dog to a number of charities operating in the area that take in abandoned dogs at no cost, but he chose not to.

She said that such a sentence would send a message to other animal abusers.

Only a week before, the same judge made Spanish legal history by sentencing a man to prison after he beat his racehorse to death with a metal rod after it was disqualified from a trotting race for breaking into a gallop.

The animal rights party Pacma had called the decision a huge step forward.

“First the man who beat a horse and now the man who starved his dog to death, we are finally seeing justice for abused animals,” Silvia Barquera, the president of Pacma, told The Local.

“It sends a message and sets a precedent that such animal abuse is not acceptable and will not go unpunished.”