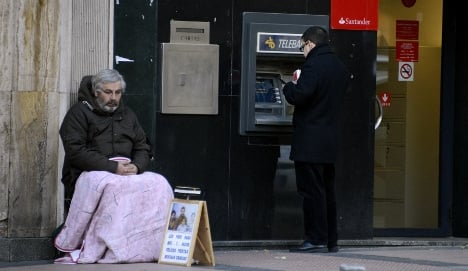 The study analyzed 13 major European cities between 2001 and 2011 and found that segregation had grown the most over that time period within Madrid.

The research, compiled in a book called Socio-Economic Segregation in European Capital Cities, shows that Europe’s rich and poor are living farther and farther away from each other due to inequality, which could become “disastrous for the social stability and competitive power of cities”.

“This spatial segregation of rich and poor can become a breeding ground for misunderstanding and social unrest,” said Maarten van Ham, the urban renewal professor who lead the study team, in a statement.

“Recent riots in Paris, London and Stockholm cannot be considered separately from the concentrations of poverty in these cities. Our study demonstrates that this problem is growing.”

The main reasons behind the rise in inequality among European cities were globalization, inequality, restructuring of the labour market, and changes in welfare and housing systems.

In Madrid, the financial crisis seemed to deepen segregation that was already ongoing, according to the study.

The poor became poorer where they lived while the rich stayed rich, able to cope with the crisis given their high-ranking positions.

A separate study by the Organisation for Economic Co-operation and Development (OECD) earlier this year showed that the economic crisis had widened the divide between rich and poor to record levels.

There also appears to be a clear divide between north and south, where the northern area of Madrid has higher levels of wealth, Daniel Sorando, who directed the latest study for Spain, told newspaper El Pais.

By contrast, Oslo was the least segregated city, according to Van Ham. Research showed that this was where many areas exist that are home to both rich and poor, though the city still has clear social divisions.

Van Ham presented the book’s research to members of the European Commission on Wednesday and is also set to discuss the research with the OECD next week.