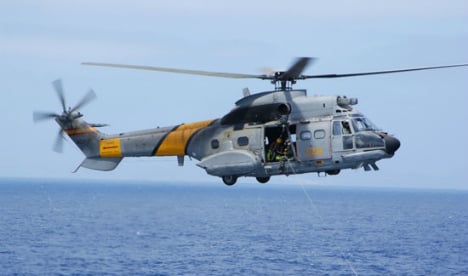 The cabin was located on the ocean bed and the military judge investigating the accident has ordered it to be retrieved to see if the bodies of the crew are inside, a defence ministry spokesman said on Wednesday evening.

The helicopter went down on October 22th, about 280 nautical miles (520 kilometres) from an air base on Gando, its destination on the Spanish island of Gran Canaria, off the coast of Morocco.

It had set off from Mauritania after refuelling following two weeks of military exercises in Senegal.

Spain's defence ministry said at the time that Morocco had said that the crew members had been rescued by a fishing vessel which was taking them to Dakhla, a town in Moroccan-controlled Western Sahara.

But the following day Spanish Defence Minister Pedro Morenes said the information provided by the Moroccan authorities turned out to be wrong and rescuers continued their search.

“At the moment we do not rule out anything, we are studying all possibilities”, including a possible kidnapping, a defence ministry spokesman said Monday.

The governments of Spain and Morocco “were deploying all means” needed to help in the search, the defence ministry said in a Twitter message.

The defence ministry has not said what may have caused the helicopter to go down.