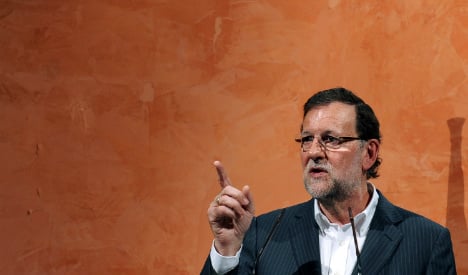 Conservative Mariano Rajoy said he had already spoken with the leader of the Socialists, Pedro Sanchez, and the leader of centre-right Ciudadanos, Albert Rivera, to coordinate policy over Catalonia.

He told news radio Cadena Ser he would announce the results of the negotiations after the official meeting had taken place.

On Tuesday, Catalan pro-independence parties said they would pass a resolution in early November in the regional Catalan parliament calling on the chamber to announce the formal start of secession from Spain and the formation of a new republican state of Catalonia.

“What this document announces will not take place,” Rajoy said when asked about the motion.

“The government knows very well what it must do,” added Rajoy, who faces a general election on December 20th, without spelling out what measures he will take.

“We will apply the law and we will not get into the details,” the prime minister said, adding that “responses must always be given with prudence and proportionality”.

Rajoy has faced criticisms from within his own party that he has not done enough to counter the Catalan separatist movement.

The region of 7.5 million people, with its own widely spoken language, accounts for a fifth of Spain's economic output.

While the pro-independence camp won a majority of 72 seats in the 135-seat Catalan parliament in regional elections last month, it captured just 48 percent of the vote — a fact emphasised by the central government in Madrid to justify its opposition to independence.