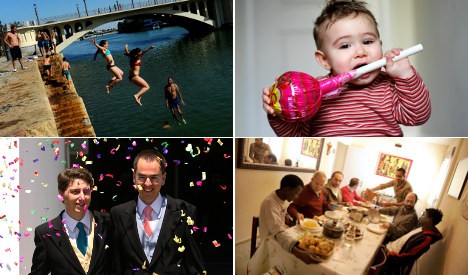 'Spain in a Day' will feature clips of Spaniards going about their daily lives on October 24th. People across Spain were asked to submit clips of no longer than 15 minutes recorded on the specific date.

The documentary, inspired by Ridley Scott´s 2011 film Life in a Day, will follow Spaniards living both in Spain and abroad.

It will be directed by internationally-acclaimed filmmaker, Isabel Coixet.

“I'm so grateful to all the people who have wanted to take part in this project, now let's get to work!” Coixet said. Speaking during a press conference to launch the project in early September, Coixet revealed more details about the film.

“It is a movie that is going to be made from the fragments of the lives of everyone,” Coixet told broadcaster RTVE, which is also part of the project. “Births, weddings, baptisms – moments of loneliness, moments of happiness. After sex, before sex, sex – well, I don't know, that, too.

“We are trying collect the lives of all Spaniards in a way that is real, authentic, entertaining, dramatic. But above all, it has to be true.”

Potential stars of the documentary have until November 15th to submit their videos on the website spaininaday.es

The movie will first premiere at the San Sebastian film festival next year before hitting move theatres and later being broadcast on TVE.

English filmmaker Ridley Scott's Life in a Day project received more than 4,500 hours of footage in 80,000 submissions from 192 nations. The same format has been copied in the UK, Japan and Italy.