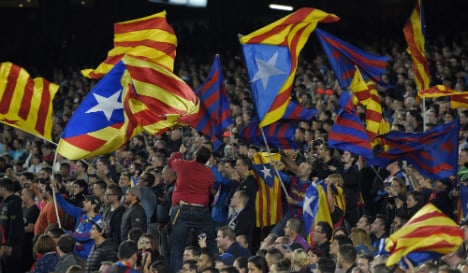 It was the second such sanction in a matter of months as Barca were fined €30,000 for the same reason after their Champions League final success against Juventus.

However, Bartomeu claimed he would drag Uefa through the courts for violating the club's fans' right to freedom of speech.

“Enough is enough,” he told the club's annual general meeting on Sunday.

“We will appeal the sanction to Uefa's appeals committee and if they don't accept our case we will go to the Court of Arbitration for Sport.

“If even there our case isn't accepted, we will go to the High Court of Switzerland and, if necessary, the European Court of Human Rights in Strasbourg.”

According to Uefa's disciplinary regulations, “messages that are of a political, ideological, religious, offensive or provocative nature” are not permitted.

“It threatens one of the most basic rights of democracy. That of the freedom of expression,” added Bartomeu.

“They have sanctioned Barca for allowing, or not impeding, a number of members from expressing their feelings in a peaceful manner with a symbol, the Catalan flag for independence, that doesn't promote violence, that is not banned in any place and that represents a legitimate feeling of identification for many Barcelona fans and Catalans.”

Barca have long been targeted as a symbol for those that want to see the rich north-eastern region of Catalonia break away from the rest of Spain.

However, before recent regional elections in which pro-secession parties won the majority of the 135 seats in the Catalan parliament, Bartomeu insisted the club would remain neutral in the debate.