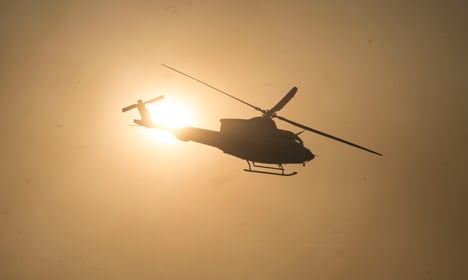 The helicopter (not the one pictured) went down on Thursday afternoon. Photo: AFP

“The people are missing, we do not know in what circumstances they disappeared. We have not been able to reach the cabin” of the helicopter, Defence Minister Pedro Morenes said late on Friday after meeting with family members of the disappeared on the Spanish island of Gran Canaria.

“We can't lose hope but we are working on all hypotheses,” he added at a press conference at the Gando air base.

The governments of Spain and Morocco “were deploying all means” needed to help in the search, the defence ministry said in a Twitter message.

The helicopter went down Thursday afternoon about 280 nautical miles (520 kilometres) from Gando, its destination on the Spanish island of Gran Canaria, the defence ministry said in a statement at the time.

It had set off from Mauritania after refuelling there following two weeks of military exercises in Senegal.

The defence ministry said in a Twitter message later on Thursday that a Moroccan rescue helicopter sent to the scene spotted the aircraft floating and saw flares fired from a life raft before the patrol boat picked the crew up and took them to Dakhla, a town in Moroccan-controlled Western Sahara.

The minister said the defence ministry had originally been told by Moroccan authorities that the three crew members had been found but that the information turned out to be wrong.

The defence ministry did not say what may have caused the helicopter to go down.