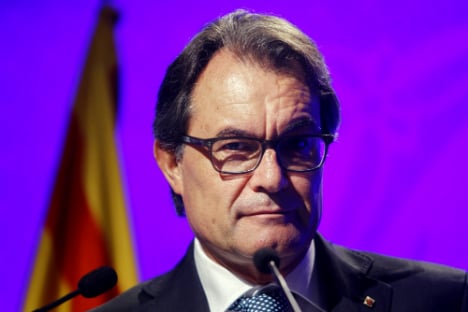 His remarks came after a week in which the party treasurer, and its former treasurer were detained on suspicion of charging commissions in exchange for public works contracts.

“The public procurement of the government of Catalonia is impeccable,” Mas said during an appearance before a parliamentary commission in Barcelona.

Spanish authorities suspect that the commissions were demanded of firms which won public works contracts from town halls controlled by the party.

Police on Wednesday arrested 11 people including Convergence treasurer Andreu Viloca, as part of a graft probe targeting the party, which has spearheaded Catalonia's drive to break away from Spain.

As part of the probe, police had at the end of August raided the party's headquarters as well as the offices of former party treasurer Daniel Oscar.

Oscar himself was detained for questioning with the investigating judge confiscating his passport, a police spokesman said.

Mas has described the investigation as a “witchhunt” after his party won a regional election in Catalonia on September 27th.

His Together for Yes coalition — comprising Convergence and leftist separatists CRE — clinched 62 seats during the the vote, six seats shy of a majority in the 135-seat Catalan parliament.

The arrests come as Mas is seeking the support of the leftist Popular Unity Candidacy (CUP), whose 10 seats would give the pro-secession parties an outright majority in the assembly.

During the campaign Mas vowed to set Catalonia on a path toward independence within 18 months if he gets backing from the regional parliament.

Catalonia is home to 7.6 million people and accounts for one fifth of Spain's economic output.