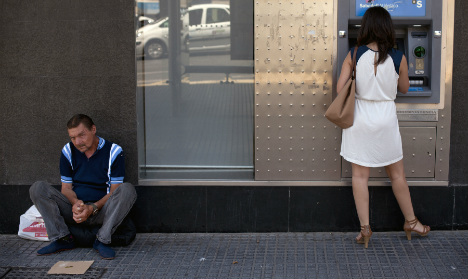 A new report by the European Anti-Poverty Network (EAPN) revealed that a further 790,800 people fell into the group during 2014, a rise of two percentage points on the year before.

This marks an overall rise of 4.5 percent since 2009 when the effects of Spain’s economic crisis really started to bite.

But while Spain’s government is keen to portray Spain as well on the road to recovery ahead of the December 20th general election the report shows that the poorest sector of Spain is still growing.

Since 2009, the number at risk of child poverty has risen by 4.5 percent while those aged between 16 and 29 have risen by 11 percentage points to reach 36.4 percent, hardly surprising in a demographic suffering around 50 per cent unemployment.

People are considered at risk of poverty if they are earning less than €663 per person per month.

The figures showed a clear north and south divide in Spain, with more people living below the poverty in the south of Spain.