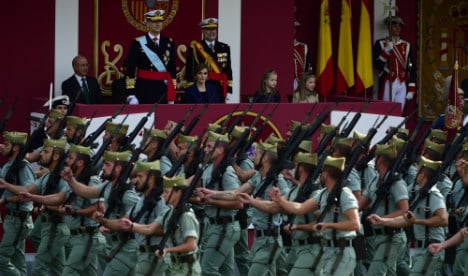 The day – a national public holiday in Spain – commemorates the day Christopher Columbus reached the Americas in 1492.

October 12th is also Armed Forces Day, when Spaniards pay homage to their fellow countrymen and women who have given their lives for Spain.

Spain’s armed forces staged a parade through the centre of Madrid, which included 3,400 soldiers and military aeroplanes staging a fly past, leaving red and yellow smoke trails representing the Spanish flag. Thousands of onlookers lined the route, waving Spanish flags and craning their necks to catch a glimpse of the young royals, who were accompanied by their two daughters, Leonor and Sofia.

The celebrations were also attended by Spanish Prime Minister, Mariano Rajoy, and his cabinet, as well as Socialist leader Pedro Sánchez.

But not everyone was celebrating. Barcelona’s left-wing mayor Ada Colau refused to take part in the celebrations, calling the day a “celebration of genocide”.

The Barcelona mayor tweeted “Ashamed at the state for celebrating a genocide and with a military parade that cost €800,000!”

Many people took to social media with the hashtag #nadaquecelebrar or #nothingtocelebrate to express their feelings about the national day celebrations.

The mayor of Cádiz also criticized the festivities on Twitter:

“We never discovered America, we massacred and submitted a continent to our culture in the name of God. Nothing to celebrate.”

But she met with the ire of the right-wing press for her choice of outfit. Conservative newspaper ABC ran a feature on what the women (and only the women) who attended the parade wore – describing Carmena as looking like “a 1940s postal worker”. In Barcelona, opponents of independence staged a pro-unity demonstration, calling for the northeastern region to remain part of Spain.

Pro-independence parties recently won a majority in Catalonia's regional election, which they had billed as a de facto vote on independence.

The demonstration also attracted far-right protestors including members of the Falange, the party of Spanish dictator Francisco Franco.