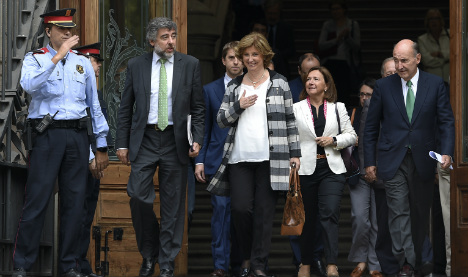 She went before the judge and was due to be followed later on Tuesday by the former deputy leader of the regional government Joana Ortega and on Thursday by its president Artur Mas, the top leader of the independence movement.

They are charged with civil disobedience and misuse of public funds for holding a non-binding ballot in November 2014 in which Catalans were asked to vote on whether their region should remain part of Spain.

What would change if Catalonia declared independence from Spain?

Leaving court after Tuesday's hearing, Rigau told reporters she had not “given orders or instructions” to public education staff to set up polling stations in schools. She argued that the vote was run by volunteers.

Catalans' long-standing demands for greater autonomy have intensified over recent years as Madrid has resisted their bids for reform, and have surged in the recent economic crisis.

Spanish Prime Minister Mariano Rajoy vows to defend the unity of Spain as its recovers from recession ahead of a general election on December 20th.

His government launched a successful legal challenge against Mas's bid to hold a full referendum on independence.

He later teamed up with other separatists in a joint list in the September 27th Catalan regional election, making it a de facto vote on secession.

The alliance won enough seats to control the Catalan parliament if it teams up with the radical left-wing separatist group CUP.

Mas's alliance had vowed to declare independence for Catalonia by 2017 if it won.