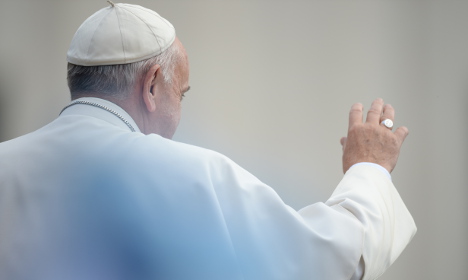 The Vatican cited lack of evidence as its reason for closing the probe.

Spanish daily newspaper El Mundo this month published a letter sent by the Pope in December 2014 to the boy's parents in which he said the Vatican was investigating the affair.

The couple filed a criminal complaint in 2013 for sexual assault and sexual abuse against a teacher at Gaztelueta school in Leioa, near the northern city of Bilbao.

The school is run by the conservative Roman Catholic group Opus Dei.

The couple also sent a letter to the pope with documents they said backed their son's accusations.

Pope Francis wrote back to say he had instructed the Congregation of the Doctrine of the Faith, the Vatican's doctrinal arm, to investigate the allegations.

“The cross is very hard. I ask Our Lord to help you carry it,” the Pope wrote in the handwritten letter dated December 29, 2014 published by El Mundo.

“In addition, today I am sending the documentation to the Congregation of the Doctrine of the Faith so that the teacher can face canonical proceedings without the boy being disturbed,” he added in the letter.

The school said in a statement that the probe “has concluded that the allegations 'have not been proven and as a result, the good name and reputation of the accused must be restored'.”

“This conclusion has been reached following a wide-ranging investigation… which included a 'detailed analysis that evaluated several public and private documents' as well as interviews and testimony from several people.”

The school said the Vatican's finding confirmed the conclusions of its own investigation into the case as well as that of several other probes by regional government authorities.

Pope Francis has called for “zero tolerance” of sexual abuse by clerics.

He has said Catholic bishops “will be held accountable” for failing to protect children.

A Spanish court in the southern city of Granada in January charged ten priests in another sex abuse case that prompted the pope to call one of the alleged victims.

But the following month the court dropped the charges against all but one priest because the crimes fell within the statute of limitations.