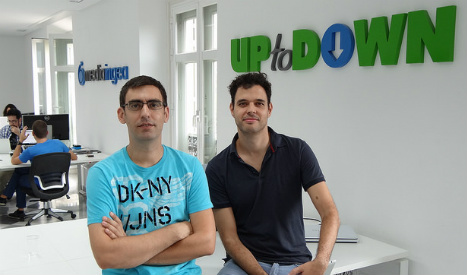 It takes a brave entrepreneur to take on Google, but that is exactly what Luís Hernández, creator of Uptodown.com, is doing – and his site is proving a serious threat to the technology giant’s monopoly when it comes to mobile apps.

But how did a humble Spanish startup rise through the global ranks to become Google Play’s biggest rival and one of the top 300 most-visited websites in the world?

“Around four years ago, with the smartphone boom, we decided to move into mobile,” Hernández said in an interview with The Local, explaining the startup’s most successful strategic move.

“We were one of the first ones to do it and it has been really successful thanks to our open and transparent philosophy.”

Uptodown.com is a worldwide download site offering mobile apps and software that can be downloaded straight to your desktop.

It was founded by Hernández and his university friend Pepe Dominguez, who bonded over their shared love of computers while studying at the University of Malaga.

Unlike the Google Play store or Apple’s app store, it is available to anyone, anywhere in the world, and is free for both users and app developers. “We have every kind of app, there are no restrictions and users can download our apps onto any device or even straight onto their desktops,” says Hernández, explaining a key difference between Uptodown and the Google Play store.

Because the site is completely free for both users and developers, it's financial model rests on revenue created through ad banners.

“The disadvantage of that is you need huge levels of traffic to be profitable, but fortunately we have 70 million users a month who use Uptodown to download apps,” says Hernández.

The site also offers a “professional analysis” of each app by its international team of editors, rather than allowing app developers to include their own descriptions, bypassing biased write-ups. Users can also leave comments and rate the apps.

Uptodown’s 45-strong staff comprise of two to three local workers in each country it operates in, working in 13 languages.

The startup’s very existence in an online world dominated by the US giant Google is of real importance to Hernández:

“I think that using Uptodown is also a question of ethics. Eighty percent of all the information we receive on our mobiles comes from apps. To leave this entire industry in the hands of only one company that decides what can and cannot appear in its shop seems irresponsible,” he explains.

“I think that an independent company like Uptodown could be the solution to Google’s potential monopoly of the industry in the future,” he adds.

It might seem unusual that such a burgeoning tech success has come out of the touristy southern Spanish city of Malaga, but Hernández says the company has no plans to move its headquarters:

“We have thought about having teams in Boston in the USA or Brighton in the UK, but we’ll always have our main base here in Malaga,” he says.

“There is a group of people in Malaga involved in some really exciting startups, like Freepik.com, VirusTotal, BeSoccer.com or Todocoleccion.net.

“We have the talent and a great city ready to welcome it, so I’m very optimistic about the future of startups in Malaga,” he says. Spain is a hotbed of talent, says Hernández, but could definitely improve when it comes to getting children into tech at an early age:

“An important factor not given enough attention in Spain today is getting school children into programming from an early age,” he says.

“It helps children across other disciplines, with problem solving and in the longer term, helps them break into the world of technology.”

Hernández does not rule out working with other companies on the startup in the future, but there is one he categorically rules out.

“We wouldn’t sell to Google,” he says.

“It has always been a strategy of ours to compete with Google Play. Our aim is to get a billion downloads a month by the end of the year and become a real alternative to Google.”