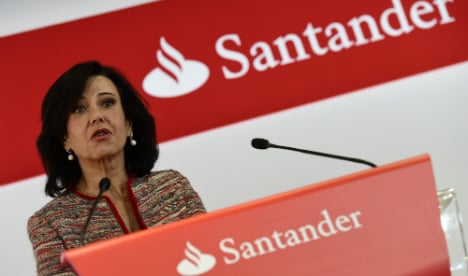 Ministers approved the fine for Santander, the eurozone's biggest bank by market capitalisation, in June for “a very serious offence”, Spain's Supreme Court said in a written ruling on Wednesday.

It gave no details of the offence but said it breached a “law for the prevention of money laundering and financing of terrorism”.

Santander declined to comment on the case when contacted by AFP.

In the ruling, dated October 2nd and released by the court on Wednesday, judges rejected Santander's request to delay news of the fine being published in Spain's official journal.

The bank argued its image would be irreparably damaged by news of the fine and that there was no need to publish it immediately, the ruling said.

But the court ruled it was in the public interest to inform the markets of the fine on the grounds of banking transparency.

The amount was small compared to fines Santander and other big banks have received in the past, but the reference to a “serious” offence drew media attention.

Thanks to its overseas operations, Santander was relatively unscathed by the crisis that struck Spain's banking sector from 2008.

It saw its quarterly profits surge 17 percent to €1.7 billion in the second quarter of this year.