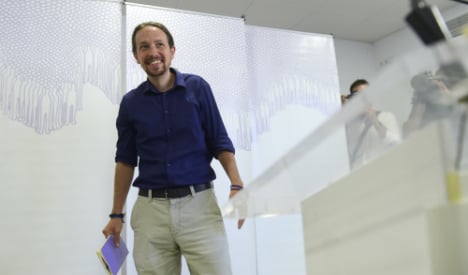 In an interview with AFP, Iglesias, a member of the European Parliament, also accused Socialist French President Francois Hollande of being “cowardly” towards Germany and letting Berlin dominate Europe's affairs.

Founded in early 2014, Podemos – which means “We Can” – shook up Spanish politics with its rapid growth but appears to have stalled in third place in opinion surveys.

With less than three months to go until Spain's December 20th election, Iglesias said he was determined to “win the game”.

Podemos had banked on a strong result in last month's regional polls in the northeastern region of Catalonia to serve as a launch pad for the December vote, but the coalition it was part of came in fourth.

The issue of Catalan independence dominated the campaign and appears to have drowned out Podemos' focus on the need to fight corruption, austerity and economic inequality.

“We made some mistakes,” Iglesias said when asked about the Catalan election. “We are going to fight until the end to say something that most people in this country understand: we must remove corrupt officials from institutions, we must govern differently… we must defend social rights”.

Iglesias, 36, a political science professor, points out that just a few months before Spain's municipal elections in May no opinion polls had predicted the victory in Madrid and Barcelona of platforms backed by Podemos.

To counter the ruling conservative Popular Party as well as the main opposition Socialists and new centre-right party Ciudadanos, Podemos' strategy seems clear – it must move to the centre where elections are decided.

“We want a reasonable government programme, Neo-Keynesian, which does more to protect majorities,” said Iglesias in a reference to a school of economic thought developed after World War II from the writing of British economist John Maynard Keynes.

To create work, the main challenge in Spain where the unemployment rate surpasses 22 percent, what's needed are “expansionary policies that guarantee social rights, that allow workers to consume more, better negotiate their work conditions, reduce the age of retirement.”

While Spanish media regularly speculate that Spain's far-left parties will form an alliance that would see the tiny Izquierda Unida, or United Left, party join forces with Podemos, Iglesias categorically denied this possibility.

“I have said it 40 times…There will be no agreement with Izquierda Unida,” said Iglesias, who was once an advisor for that party.

“The newspaper El Pais said in an editorial 'here is what you should do. Ally yourself with Izquierda Unida, occupy the left of the political scene'. That is what our adversaries want,” he added.

They “are pushing us towards a scenario in which they know we can't win.”

Asked if Podemos could ally itself with the Socialists, Iglesias said: “The only possible scenario for an agreement would be if we had more votes” than them.

Outside of Spain, Podemos' main criticism seems to be directed at the German government which has enforced austerity policies in Europe.

“We live in a Europe dominated by Germany and this is bad news for southern Europeans,” Iglesias said.

“I think it is undignified that there was so much toughness to impose draconian conditions on Greece, but by contrast this toughness is not applied when it comes to providing humanitarian aid” to the country to help it deal with an influx of refugees.

“France has given up a relationship of equals with Germany which is why I use the word 'cowardly' to define a president who has not dared to put limits on (German Chancellor) Angela Merkel,” Iglesias said.

“If France does not put limits on Germany, who will do it in Europe? I think it's very disappointing.”

By Samir Tounsi with Michaela Cancela-Kieffer in Madrid