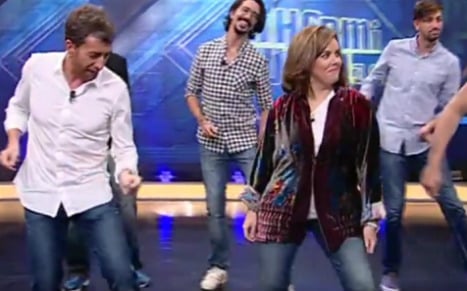 Screenshot from El Hormiguero / Antena Tres
Soraya Saénz de Santamaría, Spain’s deputy prime minister since the Popular Party came to power in 2011, offered the public a rare glimpse into a different side of the nation’s bearded leader when she appeared on a popular television chat show.

With an election less than three months away, the 44-year-old deputy of the Popular Party government was a guest on the popular television chat show ‘El Hormigero’ on Tuesday evening, making an appearance that has caused quite a stir.

More usually seen behind a row of microphones during the weekly post-cabinet press conference in Moncloa, Saénz de Santamaría, on Tuesday revealed her party side when she her hair down to strut her stuff on the dancefloor.

The 44-year-old opened the show, performing a dance routine alongside presenter Pablo Motos to the tune of 'Updown Funk' by Mark Ronson featuring Bruno Mars.

But this wasn’t just about her own love of dancing, she also shared a secret about Spain’s 60-year-old conservative leader.

“He is a fun guy and a great dancer,” she said during the interview.

“Sometimes I put on some tunes and am busting some moves and he says 'put on some naff eighties music, that’s the best for dancing',” she said.

It’s not the first time her dancing skills have been recognized. In April during Seville’s Feria she was filmed dancing the traditional Sevillana folkdance.

The general election will take place on December 20th.