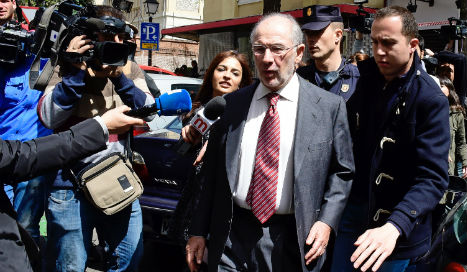 Rato surrounded by officers when he was detained in April. Photo: Gerard Julien / AFP

A magistrate from the Madrid regional courts quizzed the former politician  from the ruling Popular Party and ex-banking chief on Tuesday for over three hours before granting him bail and confiscating his passport.

In a statement released on Tuesday, judicial authorities said Rato must report to the court once a month. It said he could still travel within the European Union using his Spanish identity card. The judge announced the decision after quizzing Rato for three hours.

Rato, 66, a former leading light of Spain's ruling conservative Popular Party, is the target of several judicial probes which have embarrassed the government ahead of a December 20 general election.

Rato is also being investigated for alleged fraud during his time as chief executive at Bankia, a Spanish lender bailed out by the government in 2012.

He has also been questioned in court as part of a third probe into alleged spending sprees on company credit cards by him and other ex-managers of Bankia.

Rato has denied any wrongdoing in the cases. None of the investigations have yet gone to trial.