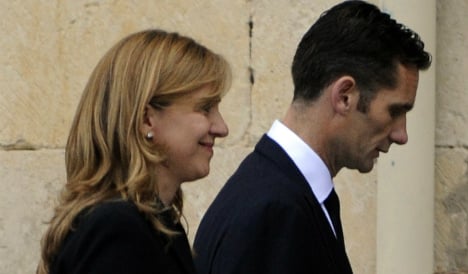 The royal couple will go on trial in Mallorca. Photo: AFP

She has already been stripped of her title of the Duchess of Palma, and will heap yet further embarrasment on Spain’s ruling Bourbons when she becomes the first royal born member to stand trial.

The 50-year-old youngest daughter of King Juan Carlos will be in the dock alongside her disgraced husband, Iñaki Urdangarin, a former Olympic handball champion who is accused of fraud and embezzlement.

Cristina will stand accused of two counts of accessory to tax fraud while her husband is accused along with a former business partner of creaming off €6 million ($6.6m) in public funds from contracts awarded to Noos, a charitable foundation which he chaired.

The couple, who married in a lavish ceremony in 1997 and have four children, suffered a dramatic fall from grace when allegations emerged in the far-reaching corruption scandal that alleges Urdangarin used his royal name to secure government contracts in the Balearic Islands.

The couple's multi-million-euro mansion was impounded by the courts and then sold and Cristina was notably absent from ceremonies marking Felipe's ascension to the throne in June 2014 on her father’s abdication.

The corruption controversy has outraged Spaniards and helped sour the last years of the reign of Juan Carlos, who gave up the throne after nearly four decades hoping his son could freshen up the image of the monarchy.

Also on the bench in the trial starting in January at a court in Palma de Mallorca will be 16 others.

The trial will see a possible 364  witnesses called to the stand according to court papers seen by the Diario de Mallorca newspaper.

Among them will be high-profile politicans including former Justice Minister and ex-Madrid Mayor Alberto Ruiz-Gallardón, the ex-president of the Valencia region Francisco Camps and Rodrigo Rato, the ex-IMF chief who is facing separate fraud charges in a different case.

A request from the public prosecutor to call King Felipe VI to give evidence was rejected by the judge 'for legal reasons' presumably because the monarch is afforded legal immunity but two former chief of staffs from the royal household will be called as witnesses.