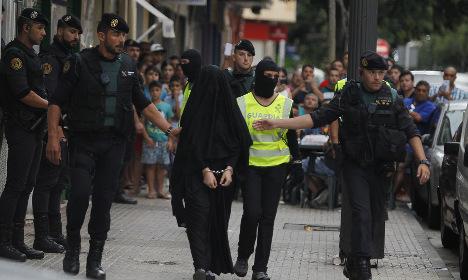 Spanish police arrest an 18-year-old Moroccan woman suspected of recruiting other women via the internet to the jihadist group Isis in September. Photo: Jose Jordan/AFP

The suspects were part of a “network of recruitment, indoctrination and sending foreign fighters to fight for Daesh (Isis) in the regions of Syria and Iraq under its control,” the ministry said in a statement.

The statement said arrests “in the last few hours” were part of a joint operation between the two countries in the Spanish cities of Toledo, Badalona, Xeraco, and in Casablanca, Morocco.

Spain and Morocco joined forces on August 25 in another operation that saw 14 other alleged recruiters arrested.

Europe has been grappling with a growing number of extremist cells on its territory and radicalised Muslims leaving to fight for the Isis or joining the rebels in Iraq and Syria.

More than 100 people from Spain are suspected of having joined extremist fighters in Iraq and Syria and authorities fear they may return to launch attacks.

In a major crackdown on extremists, including those operating online, Spanish police have arrested scores of suspected recruiters in recent years.