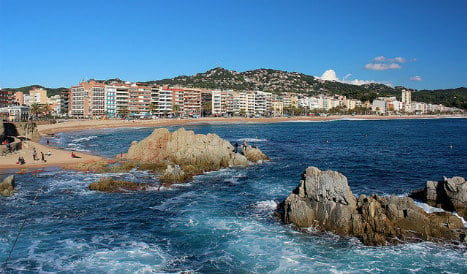 Coggins and Aston went for a late night swim in the Mediterranean at around 4am when they got into trouble. One of the women reportedly entered the water to rescue the other when they were both washed away by strong currents.

Two #Birmingham women who drowned whilst on holiday in Spain have been named as Lisa Coggins and Tracey Aston. pic.twitter.com/bqRZQu3Gd0

The partner of mother-of-two Lisa Coggins confirmed to the Birmingham Mail that she was one of the women killed.

“Lisa was with her sisters and her friend,” Mario Sassano, 36, told the newspaper.

Sassano paid tribute to his partner of two years.

“She was beautiful, she was lovely, she took my two kids on and treated them like they were her own, more than her own.”

Mr Sassano has spoken to his two sisters who were on the group holiday and also tried to help as the tragedy unfolded.

He said: “She had gone to the water’s edge to save the other girl, she wasn't even in the water. She was shouting at her to swim. A wave came and hit her and she fell over and another wave came and took her back out.

“I’ve been told the same story six times because I want to hear different versions and find out what happened. Every time it’s stayed the same.

“She was standing there and the wave took her.”

“She was a hardworking girl – just beautiful,” he added.

Tracey Aston's husband Aaron said that he was “just devastated”.

The women’s bodies were found at around midday on Thursday near Blanes, a town along the coast from Lloret del Mar.

“A body was spotted by helicopter about two nautical miles southeast of Lloret de Mar and the boat of the specialist diving unit boat was sent to it just after noon on Thursday,” a spokesman from the Salvamento Marítimo – maritime search and rescue service –  told The Local.

“They found the other body close by and both were taken to the port at Blanes.”

A spokesman for the town hall in Lloret de Mar said the women had been warned not to into the sea by a security guard at a beach bar.

“They were in a group of five and were told that it was dangerous to go into the sea. But two ignored him and went in the sea anyway,” Ana Riera told The Local.

When one of the swimmers had got into difficulty, a friend on shore had gone to her rescue.

“It seems one of the original swimmers was able to get to shore, but the other was struggling so a friend went to her rescue and they both got swept out to sea,” Riera said.

She added that the remaining three women in the group were receiving counselling from psychologists and that the town hall “send their condolences to the families of the two drowned women”.

Much of coastal Spain has been on alert for bad weather conditions with the Catalan coast, Balearic Islands and Levant battered by high winds.

The national weather office issued an alert on Thursday for the coast of Catalonia because of the risk posed by the rough waters, with waves of up to four metres (13 feet).

On Wednesday rescue services called off a search for a homeless man, also thought to be British, who was swept away when a river burst its banks during a storm in Malaga.