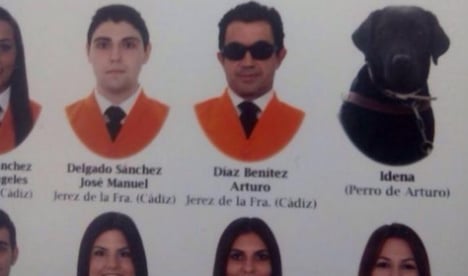 Students studying Social Work at the University of Cádiz in southern Spain wanted to pay homage to a familiar face they had seen padding up and down the halls during their degree.

So, Idena, a guide dog for one of the course’s blind students, was included in the class’ graduation photographs, appearing alongside his owner and in various other photographs in the end of university memento.

In one photograph, the black labrador is seen sporting a mortarboard, the square academic cap usually worn by graduating students.

“I bet this dog attended more lectures than most students!” wrote Jose Díaz-Reixa.

“Magnificent. Ten out of ten for the University of Cádiz,” said Pepe Valdivia.