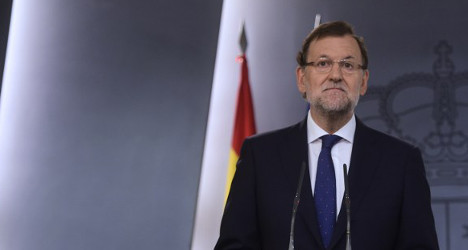 Rajoy made the announcement during an interview on Spain's Antena 3 radio station.

His announcement ends months of speculation and confirms a September 3rd comment from Rajoy in which he said the election would “most probably” be on December 20th.

Speaking on Thursday, the Spanish Prime Minister said a preferred December 13th date would have resulted in a conflict with the Christmas period, and with preparations for the passing of the 2016 budget in parliament, El País newspaper reported.

Rajoy enjoys an absolute majority in parliament with his conservative Popular Party, but opinion polls suggest support for the opposition Socialist Party is running close behind.

Far-left party Podemos, which wants to loosen the grip of austerity introduced by Rajoy's government since it came to power in 2011, is running in third place.

If the Socialists and Podemos teamed up in a coalition, they could boot the PP from power, surveys suggest.

Rejecting an alternative proposal to hold the vote earlier in December, Rajoy told Antena 3: “We will now have a margin in which to install the parliament after the holidays.”

Rajoy won a resounding victory in 2011 as voters turned against the ruling Socialists for their management of the financial crisis that rocked the country in 2008.

Catalan demands for independence will likely loom large over the upcoming polls after separatist parties on Sunday won a majority of seats in Catalonia's regional election, a vote they had billed as a de facto referendum on breaking away from Spain.

Rajoy has repeatedly refused separatists' demands for an official referendum on the matter and this week ruled out discussing a split with the wealthy northwestern region.