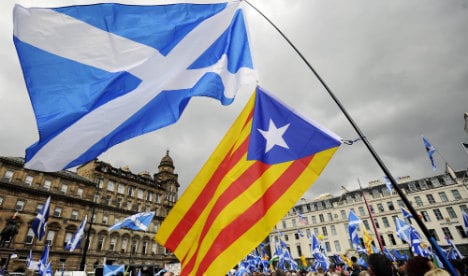 The nationalist leader of Scotland, where a referendum last year resulted in a “no” to independence, congratulated the Catalan separatists on the result which saw separatist parties win the most seats in the regional parliament.

“Many people in Scotland, given our recent experience of a referendum, will be looking with great interest at what is happening in Catalonia,” the country's First Minister Nicola Sturgeon said in televised comments.

Meanwhile Flemish nationalists in Belgium on Monday hailed the “victory” of Catalan separatists in elections, calling for stronger ties between the Spanish region and their own Dutch-speaking area.

“I would like to congratulate my colleague Artur Mas for his victory and I am delighted to be able to reinforce relations between Flanders and Catalonia in coming years,” said Flanders regional head Geert Bourgeois.

Bourgeois is a founder member of the nationalist New Flemish Alliance (N-VA) party which wants an independent homeland, even while it remains part of Belgium's current coalition government, led by French-speaking Prime Minister Charles Michel.

Flemish nationalists have been closely watching the situation in Spain, which has been plunged into uncertainty after groups that want to break Spain's richest region away as a new state in Europe won control of Catalonia's parliament on Sunday

“The Catalans have sent a clear signal which we cannot ignore – they have voted for a sovereign Catalonia,” said Bart De Wever, the head of the N-VA.

“I hope that the Spanish and Catalan governments can collaborate unreservedly to find a political solution,” he added.

In neighbouring France, however, the result was met with concern where the Catalan-born French prime minister called for Spain to remian “united and strong”.

France's Prime Minister Manuel Valls, who was born in Barcelona and became a French citizen after moving to France as a teenager, called on Monday for Spain to remain “united and strong”, echoing comments by leaders in UK, Germany and the USA:

“The splitting, division, disintegration of nation states will bring nothing good either to Spain or Europe, and it is up to the Spanish to make the choice,” he said.

Catalan nationalist leaders framed Sunday's election in the rich northeastern region as a proxy vote on secession after Rajoy refused to allow an official independence referendum like the one in Scotland in 2014.

Groups that want to break Spain's richest region away as a new state in Europe won a combined 72 seats in the 135-seat parliament in Sunday's polls, but they won fewer than half the votes overall — just under 48 percent.

The separatist alliance led by Artur Mas now faces tough negotiations to strike an accord with CUP, an anti-capitalist citizens' group that does not want Mas to lead the separatist movement.

CUP said Monday it was launching meetings with various groups in the new parliament to negotiate a deal. CUP said it would insist on urgent social aid measures for the poor and that the coalition select a leader other than Mas, who is widely despised on the left.

“We are going to appoint someone who has nothing to do with spending cuts, privatisations and corruption,” said CUP's number two candidate Anna Gabriel Sabate.

Rival politicians and newspapers were divided over whether the results added up to a victory for the separatists or not.

Together for Yes and CUP insisted the vote gave them a mandate for independence.

But Rajoy said their failure to get more than 50 percent of the vote together shows “they don't have the support of the majority of people.”

Observers agreed the vote left Spain in a complicated situation as it prepares for December's general elections.

“They have used a regional election for a question that should be resolved in a referendum,” political scientist Pablo Simon told AFP.

“The mandate is a bit lame from the start.”

Simon said the result “sends a very strong signal to Madrid, telling them they have to put something on the table. Otherwise the situation is going to fester.”