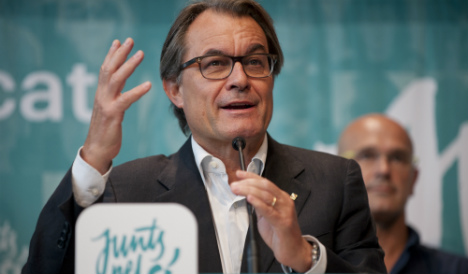 The administration's spokesman Neus Munté on Tuesday described the case as “a political lawsuit” hours after a court summoned Mas to face possible charges.

The move by the Catalonia high court intensified a bitter standoff between Mas and the Spanish government, after he and his separatist allies won control of the regional parliament on Sunday.

“We are faced with a political lawsuit, the political orchestration of a case brought by the state prosecution service,” Munté told a news conference.

Spokeswoman Munté: “We are facing political prosecution. It can only be explained by the State and the Prosecution's antidemocratic tics”

“We are faced with quirks and a democratic anomaly concerning the prosecutors and the Spanish government in order to prosecute the person who on November 9th 2014, set up the ballots so the citizens of Catalonia could express themselves.”

In a judicial investigation dating back to last year, the court called Mas to go before a judge on October 15th, in a written ruling.

Prosecutors accuse him of civil disobedience, abuse of power and embezzlement of public funds for pressing ahead with last November's ballot.

He held that ballot as a non-binding symbolic vote on independence, after Spain secured a court injunction preventing him from organizing a full-blown referendum.

Mas then called a snap regional election on September 27th and campaigned in a pro-independence alliance.

He declared victory in Sunday's regional election after his alliance won enough seats to control the parliament if it makes a coalition with radical left-wing separatists.

Spain's Prime Minister Mariano Rajoy insisted he would not negotiate on demands for independence and vowed to defend the “unity” of Spain.

Sunday's result put the wind in the sails of the separatists, but Mas's Together For Yes alliance must now strike a deal with the CUP, which refuses to accept him as leader of the separatist movement.

Munté insisted the lawsuit “will in no way affect the steps we have to take
in the coming weeks to form a parliament and to be able to continue with the
roadmap” to independence.

Mas knew ahead of Sunday's vote he would likely be summoned to court in the pending case, but the timing of the announcement prompted bitter criticism of the Spanish justice system by separatists.

The summons “is the best proof of why we need to be an independent country,” said Oriol Junqueras, leader of the centre-left ERC party which joined in Mas's separatist electoral alliance.

“While we are part of the Spanish state, issues that would be quite normal in any other country in the world, such as asking citizens their opinion, get turned into lawsuits, charges and court hearings,” he said on the radio.

The indictment provoked a strong reaction from Catalans who questioned how it possible that a leader be prosecuted for seeking the opinion of the people.

The President of my country just got indicted for being a democrat.

While others noted the symbolism of the date chosen for the court appearance.