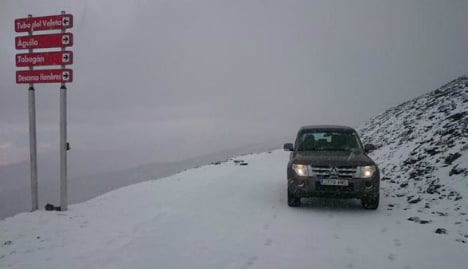 Summer is well and truly over in Spain, and winter sports fans are getting excited as the first snowflakes fall in one of the country’s best ski resorts.

The Sierra Nevada ski station in Granada, southern Spain, recorded its first snowfall on Monday and posted a series of videos and photographs, welcoming the wintery weather.

The highest points of the ski resort – the most southerly in Europe and Spain’s highest with peaks of 3,300m – were sprinkled with a fresh snowfall on Monday (see video above).

The view of the Sierra Nevada from Granada on Monday.

The mountain range, a favourite of skiers and snowboarders because of its proximity to the city of Granada, boasts 106 kilometres of pistes and usually opens during the last weekend of November or the first weekend of December, depending on the snowfall.

And far from lamenting the end of summer, Spaniards were excited at the news of the country's first snowfall of the year: the hashtag #SierraNevada was trending on Twitter as news of the wintery weather spread.

The high summits of #SierraNevada turned white #MonodeNieve on Are you ready for next season? http://t.co/TGJFAAHsgC pic.twitter.com/V9WT8L6yHM

Lower altitudes in southern Spain were battered with hail storms on Monday, which destroyed 20,000 tonnes of grapes in the southeastern region of Murcia.

The grapes, from vineyards in the popular wine-making towns of Jumilla, Yecla and Abarán were destroyed by the hail storm, which swept across the region on Sunday according to newspaper La Verdad.