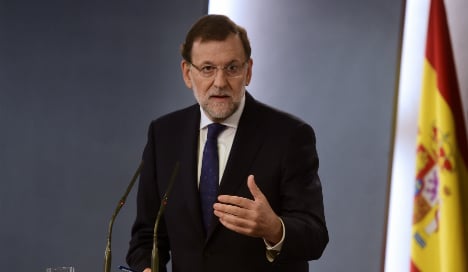 “I am ready to listen and to talk, but not in any way to liquidate the law,” Rajoy said in his first public remarks since Sunday's victory for the separatists.

“I am not going to talk about either the unity of Spain, or sovereignty,” he added.

“The breakaway and independence parties in Catalonia did not obtain support in the ballot boxes,”

“The pretentions of some were and remain outside of the law, and now it has been shown that they don't have the support of the majority of people.”

The Together For Yes independence alliance and the smaller CUP, a radical left-wing group, won enough seats between them to control Catalonia's regional parliament if they team up, with a joint total of 72 seats in the 135-seat assembly.

But the pro-independence camp fell short of winning a majority of votes, handing its adversaries in Madrid a strong argument to resist the push for independence.

Raul Romeva, head of the pro-independence coalition, nonetheless told a press conference on Monday that the election victors were determined to launch a process to secede from Spain in 2017.

“The message (from the voters) is clear,” Romeva told journalists in Barcelona.

“We have a majority which totally legitimises initialising the process.”

Catalan nationalist leaders framed the regional election as a proxy vote on secession after Rajoy refused to allow them to hold an official independence referendum like the one held in Scotland in 2014.

He argues it would violate the Spanish constitution's stipulation that only the national government can call referendums on sovereignty, and that all Spaniards are entitled to vote in such a ballot.

The European Union said on Monday that the landmark victory of Catalan separatists in elections was a subject for Spain to deal with internally.

“The European Commission, as you know, as a matter of principle does not comment on regional elections. This is a domestic issue for Spain,” Commission spokesman Margaritis Schinas told reporters.

“It is not for the Commission to express a position on questions of internal organisation related to the constitutional arrangements of a particular member state.”

Jean-Claude Juncker, the president of the European Commission, was “informed” of the result but had not had any immediate contacts with the government in Madrid and regional government in Catalonia, Schinas said.

However, the European Commission, the executive arm of the 28-nation EU, has previously said that an independent Catalonia would have to reapply for entry to the bloc as a state in its own right.