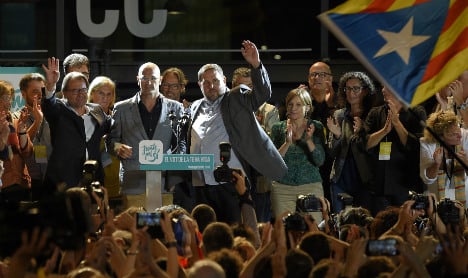 00:00 Here is our summing up at midnight

Separatists in Catalonia won control of their regional parliament Sunday in an election that they vowed would set them on the road to independence from Spain, near-complete official results showed.
With 97 percent of the votes counted, the main pro-independence alliance held 62 seats and the left-wing separatist group CUP had 10, giving them together an absolute majority in the 135-deputy assembly, according to figures published by the regional government.
But although they claimed a victory, it was clear that the independence parties had not won the majority they hoped for, and in fact failed to get 50 per cent of the vote meaning the majority of Catalans had in fact rejected seceding from Spain.
And the cracks were already appearing with CUP suggesting that an alliance wasn't going to be straightforward.
The vote for the separatist coalition Junts pel Sí actually accounted for nine seats less than the two main separatist parties, Artur Mas's CDC and the left-wing ERC, secured in 2012.
It was a good result for Ciutadans, the Catalan branch of Albert Rivera's Ciudadanos party, as they won an impressive 25 seats, up from the nine that they secured in the last election in 2012, making them the second biggest party.
The socialists claimed a success because they won more seats than they were predicted to and Podemos backed coalition 'Catalonia yes we can' suffered a blow, winning just 11 seats, the same number as the Catalan Popular Party.
Catalonia should be proud of itself with a turnout of over 75 percent, the largest ever recorded in the region's history. Junts pel Sí coalition celebrating after declaring victory. Photo: AFP
23:51 Government sources say Artur Mas has failed in his independence bid
According to a report in La Vanguardia, government sources have said the result shows “that the Catalan president has failed in his breakaway strategy”. He has neither the votes nor the seats to show that Catalan society supports his challenge.
23:42 Podemos leader speaks of disappointment:
Pablo Iglesias, leader of Podemos which was part of the Catalonia 'Yes We Can' coalition: “Our result is very disappointing. I don’t want Catalonia to leave Spain, but this decision must be made by the Catalan people. I think that only if we (Podemos) govern, we can lay out a Spain in which Catalonia feels comfortable.”
23:36 Trouble between independistas already

23:30 Now it's the Podemos backed coalition to have their say
The leader of left-wing coalition Catalunya Sí que es Pot (Catalonia yes we can), Lluís Rabell, said:  “We would like to sincerely thank all the people who have given us their support. It is clear that with the 11 MPs that we have at the moment that we have not achieved the objective we wanted, but we have to say that this result is the consequence of an especially polarized election that has been difficult to manage for a candidacy based on social issues, like ours.”
Photo: AFP
23:26
For Catalan daily La Vanguardia, an absolute majority for Catalonia’s pro-independence parties is already a done deal.
While accepting Junts pel Si haven’t achieved that absolute majority, they say the platform “has the support” of the left-wing CUP group for its independence plans, something that remains to be confirmed. 23:23 Ciutadans (the Catalan version of the national party Ciudadanos) has a reason to celebrate winning 25 seats and becoming the biggest anti-independence party in the Catalan parliament. The party was only founded by Albert Rivera in 2006 before going national this year. The centre right party will be very pleased with the result which bodes well for them in the general elections later this year.
23:17 “Catalonia is Spain”
Huge celebrations as Ciutadans Catalonia leader, Ines Arrimadas, takes to the mic next to national party leader Albert Rivera.
The whole crowd erupted in chants of “Catalonia es España”.
“The majority of Catalans have today turned their backs on Artur Mas,” says Arrimadas calling for Mas's resignation.
23:16 No government reaction as yet…but
While Spanish Prime Minister Mariano Rajoy has yet to weigh on tonight’s results, ABC newspaper is citing government sources as saying the election results are “a total failure” for Artur Mas — not a complete surprise given the serious tensions between Mas and the central government in Madrid.
Those sources described the outcome of Sunday’s vote as “a triumph for the diversity of Catalan society” and highlighted the fact tonight was the first time independence forces led by the CiU and the ERC have failed to achieve an absolute majority in the Catalan parliament.
The sources also raised the issue of the lack of votes garnered by Junts pel Si platform, saying Mas’s strategy of creating divisions within Catalan society had fallen “a long way short of winning a mandate…to carry on with his secession challenge”.
23:13 The PSOE (socialist party) national leader has spoken:
Pedro Sánchez, president of Spain’s Socialist party (PSOE) has said: “These elections have clearly shown that there is a majority that does not want independence. Those fighting for independence have lost today and have left a fractured Catalonia divided into two blocs.”
23:10 Not a bad result for the socialists
The El País political correspondent points out that although the result is bad for the PP it was expected while the Catalan socialist party should be happy with their result of 17 seats as it was above what was predicted.

23:05 The leader of the Catalan conservative Popular Party has spoken
Xavier Garcia Albiol said: “The majority of Catalans have shown they are not for breaking away from Spain”
Photo: AFP
Here are the vote numbers with 93 percent of the votes counted: 23:03 Raül Romeva
The leader of Junts Pel Sí: “We have a victory and a huge political and moral legitimacy to start this process to build a Catalan Republic”
22:53 What happened to Podemos?
Spain's conservative ABC newspaper has labelled tonight “a failure” for the Catalan branch of anti-austerity party Podemos, known as Catalunya Sí que es Pot.
On current counting, Catalunya Sí que es Pot has picked up just 8.96 percent of the vote, or 11 seats, tying it in the region with Spain's ruling party Popular Party.
While it's hard to know how much to read into this result given the focus of Catalan elections on the Independence issue, it's hardly likely to bring a smile to the face of leader Pablo Iglesias. Pablo Iglesias in happier times Photo: AFP
22:49  With 93 percent of votes counted this is what seats look like:
Source: web.gencat.cat
22:39 Happy dance
Artur Mas celebrates his victory with a little foot stomping action:

22:33 Who is Raül Romeva?
Just in case you are wondering what the plans are under a Junts pel Sí government . The leader explains them on the BBC's Hardtalk on September 9th.
22:29 The floodgates are open
Raül Romeva, head of the Junts pel Sé coalition (although Artur Mas is the candidate for president): “The dam has burst” now “we will start to work together with the whole world”:

22:21 Junts pel Sí claim victory
The independence platform have claimed a victory and said they will “push ahead with independence”.

22:19 It's votes that count
Oriol Junqueras, the president of the ERC, one of the parties making up the Junts pel Sí (Together for Yes) coalition, has just said:

ERC leader @Junqueras “We have won a majority in votes and in seats. We have enough to move ahead on the path to independence” #indycat

22:15 The majority of voters DON'T want independence
With almost three quarters of the votes counted, the percentage of those who did not vote for independence parties adds up to 52.64 percent. But the separatist parties will still win the most seats and therefore will push ahead on the path to breakaway from Spain. Is that democracy?

21:56 Great result for Ciutadans
Another party that will be celebrating tonight will be Ciutadans, the Catalan arm of Ciudadanos -Citizens (C's), an anti-independence party that was founded in 2006 and only launched nationally in 2015.

Great result for @CiutadansCs @CiudadanosCs who look set to win 24 seats. 5 more than predicted and a huge leap on the 9 seats in 2012

21:45 Junts pel Sí wins in all but two municpalities

Live elections 27S: With 20.5% of vote counted, Junts pel Sí wins in all municipalities apart from two, where Ciudadanos is the victor

21:30 An easy alliance?
If the exit polls are right and the Junts pel Si wins the most votes but just short of the absolute majority it is not going to be plain sailing. An alliance with radical CUP is on the cards but the fact that the far left party led by Antonio Baños refused to join up under the independence umbrella doesn't bode well for a smooth partnership. Digital newspaper El Español provides an interesting history lesson in independence movements. There have been  some 50 referendums on independence since the Second World War but only once has a state unilaterally declared independence after a “plebiscitary election” and that was Kosovo in 2008. Interestingly, Spain has never officially recognized Kosovo as an independent state.

21:15 Together for yes celebrating

Francesc Homs, a spokesman for the Catalan regional government has tweeted: “A historic participation and seems like a majority for independence. We've done it!”

The Barcelona player cast his vote earlier today, taking his son with him to the polling booth. He is known to be in favour of independence.

Antonio Baños candidate of the left-wing CUP party, has tweeted “Goodbye to the Spanish state” along with a link to the song “Adios papa!” (Goodbye, father)

20:46 Euphoria from the separatists

Reaction from supporters of independence is one of celebration as the polls close.

There is a demonstration taking place in Madrid's Puerta del Sol against independence for Catalonia. Reports that the crowd is singing Cara al Sol, the anthem of the Falange (Spanish fascist party).

The first exit poll shows a victory for the separatist coalition Junts pel Si, but not quite enough to clinch the 68 seats needed for an overall majority. They will be looking to the Candidatura d'Unitat Popular (CUP), also pro-independence, to help them get that much-needed majority.

Here's the breakdown of seats from the first FORTA exit poll:

20:09 The first exit polls show that it's a victory for the separatists. The main candiadates have all cast their vote. Check out The Local's who's who of the Catalan elections to brush up on all the main players.

Current president of the Genralitat, Catalonia's regional government, Artur Mas. Mas' CDC party is part of a four-party coalition, Junts pel Sí. If the coalitin gains a majority it will take it as a mandate to declare independence within 18 months. The presidential candidate of Ciutadans, Inés Arrimadas and the head of the national branch of the party, Ciudadanos, Albert Rivera. Ciutadans are anti-independence and class themselves as the “only anti-independence alternative” to the main parties. The candidate for the Popular Party of Catalunya (PPC), Xavier García Albiol. The Catalan branch of Spain's conservative Popular Party (currently in power), is strongly opposed to Catalan independence. The Socialist Party of Catalonia (PSC) candidate, Miquel Iceta. The Socialists are also opposed to independence. Lluis Rabell, presidential candidate for the left-wing coalition Catalunya Sí que es Pot (Catalonia yes we can). The coalition, which includes Podemos, the party that grew out of the indignados protest movement, opposes independence, preferring to focus on social issues. 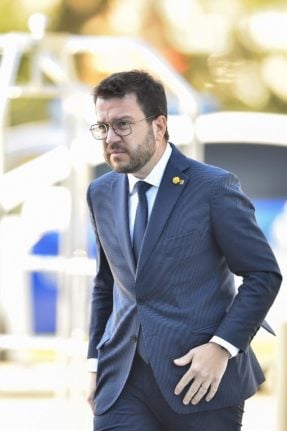