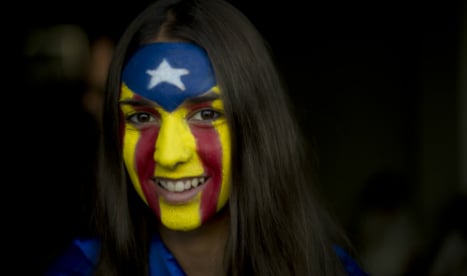 Barcelona is one of the best-known cities in the world, yet visitors expecting to practice their Spanish can often be surprised when they hear Catalan spoken in the streets. The language has had a troubled history, but is a key marker of identity in Catalonia, a region where many hope for independence from Spain.

This will soon come to a head as Catalonia prepares for regional elections on September 27th. Should a coalition united on the issue of Catalonian independence win a majority, its leader – the current Catalan president Artur Mas – has said he would declare independence. For 40 years under the dictatorship, Spain tried to present itself as an ethnically and politically homogeneous state. The execution of Franco’s opponents continued after the end of the Spanish Civil War. One prominent victim was the former Catalan president, Lluís Companys who was deported from Nazi-occupied France in 1940 and then executed in Barcelona.

After the Spanish Civil War ended in 1939, the repression was not only political but cultural too. Catalan institutions were suppressed and Catalan was banned in the school system. Indicative of the new political order were statements from the authorities, the police in particular, such as “Hable el idioma del imperio”: use the language of the empire.

The immediate consequence was that Catalonia lost many of the material resources for the production and reproduction of its culture. The Catalan language lost prestige in comparison with Spanish, and some upper-class Catalans began to start speaking more Spanish.

At the same time, between one and two million people from the south of Spain moved into Catalonia after the 1950s. These migrants were sometimes prejudiced against the Catalan language, not least because many of them did not even know about its existence before coming to Catalonia. Some felt no need to learn Catalan. This is the kind of problem which faces all stateless nations.

Despite this, most Catalan people went on using their language at home and the language has survived against the odds. Paradoxically, other languages such as Irish have had a state to protect them in the 20th century and yet it has proved difficult to stop the erosion of the language.

With the death of Franco in 1975, and once democratic freedoms had been recovered, the 1978 constitution recognised linguistic plurality and established that Spanish languages other than Castilian could be official languages of the state. Catalan is now compulsory in Catalonian schools.

Catalan is spoken in Catalonia, but also in the Balearic Islands, in parts of Valencia, in Andorra, in the French province of Roussillon, and in the Italian city of Alghero. Overall, it is spoken in a territory that contains over 13m inhabitants.

More than 150 universities in the world teach Catalan and more than 400 journals are published in the language. Ironically, Catalan studies are only weakly represented in Spanish universities, reflecting both the historical discrimination against Catalan and contemporary concerns about the drive for independence in Catalonia. Only seven universities in Spain (outside Catalonia) teach and research Catalan, whereas 22 universities offer courses in the UK, 20 French higher education institutions offer Catalan Studies, as do 24 in the US.

Catalan is the ninth language in Europe in terms of number of speakers – more than Swedish, Danish, Finnish or Greek. More than 80 television channels and more that 100 radio stations are broadcast daily in Catalan and there is a long publishing tradition. Each year in Spain almost 6,000 books are published in Catalan, some 12% of the total number of books published in the country.

More a passion than a language

What the Catalan experience seems to demonstrate is that banning a language may be an effective way of preserving it. Speakers of a banned language feel resentful and resist authoritarian reach into their culture. This Catalan emotion was picked up nicely by the Irish writer Colm Tóibín while living in Barcelona in the 1970s.

People lived in a private realm. The parents had moved into that realm at the end of the Civil War, and they had remained in that realm … But what was also interesting was that Catalan, the language, was considered a way of being free … No one was talking about history. No one was talking about politics. But people were talking in Catalan. And they considered that a fundamental way of resisting, or being apart from official Spain, or the regime.

This Catalan reaction is also expressed by a Catalan writer exiled in Mexico, Pere Calders, in his 1955 short story, “Catalans in the World”. A Catalan traveller in the Far East, at an evening party encounters a parrot which, to his surprise, utters Catalan phrases. He was overcome by emotion: “Many were the things which made us different but there was a language which made us one… Early that morning, when I left, I had a softer heart than the day I arrived.”

As a Catalan myself I have experienced this emotion. After years of teaching Spanish in Queen’s University, Belfast, a language I value the more I teach it, last year I offered a course in Catalan for the first time. Standing in front of my students on that first day, I had to try hard to avoid tears.

Irene Boada, is a lecturer in Spanish and Catalan, at Queen's University Belfast