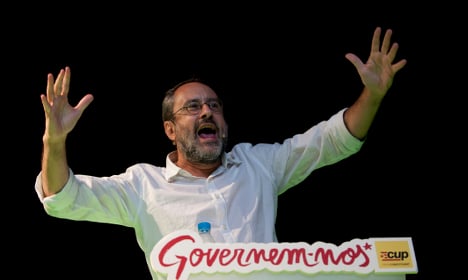 While suited leaders such as Catalan president Artur Mas and Spanish Prime Minister Mariano Rajoy have dominated campaigning for Sunday's regional ballot, after the vote attention will likely turn to a group largely wearing T-shirts and earrings.

Polls show the support of the anti-capitalist Popular Unity Candidacy (CUP) under its lead candidate, journalist Antonio Banos, will be crucial for the pro-independence alliance to secure a majority in the regional parliament.

A grassroots citizens' movement that chooses its representatives in town assemblies, the CUP has existed at a local level since the 1980s but has swelled in the crisis, nearly quadrupling its number of town councillors since 2011 to 385.

For the CUP, independence “is not about defending our national identity and language. It is about defending a better system of rights and freedoms,” said Quim Arrufat, 32, one of the CUP's three outgoing regional deputies.

“This is an opportunity for the working class to build a free society,” he told AFP.

The leader of the CUP's current parliamentary group, David Fernandez, has added colour to Catalan regional politics with his countless radical T-shirts and provocative turns in the debating chamber.

At a hearing with the banker and former International Monetary Fund chief Rodrigo Rato, who is being investigated on fraud charges, Fernandez brandished his sandal in an Arab gesture of contempt, and told Rato: “See you soon, gangster!”

In Sunday's vote, the CUP is forecast to triple its number of seats in the parliament to about nine, with around seven percent of the vote.

Those could be the extra seats conservative nationalist leader Artur Mas needs to clinch a 68-seat majority in the 135-seat chamber.

He has framed the regional election as a vote on independence, defying fierce opposition from Madrid.

The CUP is one of a wave of left-wing forces that have gained influence across Europe in the recent economic crisis.

But unlike groups such as Spain's national protest party Podemos, it says that just treatment for the poor in Catalonia can only be achieved by making it into a separate state.

“Independence and social justice have to go hand in hand,” said Bernat Pelach, a bearded 30-year-old mathematician, at the CUP's closing campaign rally Friday in the Barcelona suburb of Badalona.

Badalona was governed by Rajoy's conservative Popular Party until municipal polls in May, when opposition parties banded together to install a CUP mayor.

That was a sign of the new political dynamic in Spain following the economic crisis, which is making December's general election one of the most unpredictable in decades.

Mas says that if his left-right alliance named “Together For Yes” secures a majority on Sunday, he will have a mandate to push on towards a declaration of independence by 2017.

But he will have to answer the demands of the CUP — chief among them, that he himself step aside.

Its members despise Mas for his economic austerity measures that they say penalise the poor.

Mas's camp “will find it hard to strike a deal, but we have every desire to,” Arrufat told AFP.

He said the CUP would call for acts of non-violent civil disobedience, for example by resisting police orders, to challenge the authority of the Spanish state.

If Spain cracks down on such actions, he said, “the international community will have to intervene.”