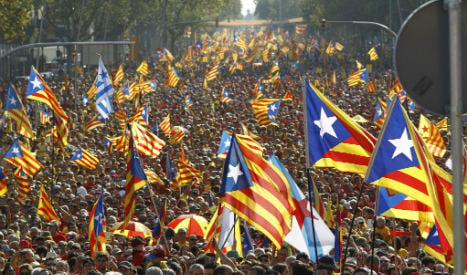 After a lifetime of hard work in Catalonia, Rafael Corpus was looking forward to a quiet retirement tending his garden.

But his golden years have been clouded by a family problem — his son is part of the growing number of Catalans who want their wealthy northeastern region to break away from the rest of Spain.

“My roots and my feelings are from Andalucia. I respect separatists but I can't understand that my son is one. I am even ashamed,” said Corpus, 66, who comes from a small town near Cordoba in the heart of Andalucia in the south.

Tensions over the issue have risen in the lead up to a regional election in Catalonia on Sunday, framed by the separatists as an indirect vote on independence.

Nationalist leaders in Catalonia have vowed to declare independence within 18 months if they win the polls.

The independence debate has triggered a bitter stand-off between the national government in Madrid and the regional government of Catalonia, as well as dividing families like Rafael's.

“It is not a problem of roots. When we are independent, I will keep visiting Andalucia and will eat gazpacho and jamon,” said his 45-year-old son, who is also named Rafael.

Father and son sit around a wooden table with the mother, Procesa Fernandez, and Sonia, their daughter, under a porch of their home in Sant Fost de Campsentelles, a village some 20 kilometres (12 miles) north of Barcelona.

The parents migrated to Catalonia a half-century ago from the southern region of Andalucia in search of a better life.

The older Rafael worked three jobs at one point, sleeping just four hours per night, until he saved enough to buy a restaurant.

He keeps a weaving machine that belonged to his mother in the living room along with a family photo taken in their native Andalucia.

In the porch an image of the Virgin of Macarena, who is venerated in Andalucia, sits alongside a painting of the picturesque Catalan fishing port of Cadaques.

A Spanish and Catalan flag decorate the entrance to the home.

Interior Minister Jorge Fernandez Diaz, who used to live in Catalonia, said in January that some Catalan families did not get together over Christmas because they were divided over the independence issue.

The independence project is turning Catalonia, which is home to some 7.5 million people, into a “divided people”, he said.

However sociologists say they see little evidence of deep divisions in Catalan society over the issue.

“It is in the interest of some to show a dramatic panorama of the situation in Catalonia, but it is not like that,” said Jordi Guiu, a sociologist at Barcelona's Pompeu Fabra University.

“There is no sociological indicator of a social divide,” he said, before adding that the situation in Catalonia is not comparable to that in Spain's Basque Country, which also has a strong independence movement, or in Northern Ireland.

Many families are united in their position either in favour or against independence. Others just avoid the topic altogether to keep the peace.

For Ignasi Sitges, a 29-year-old consultant at a communications agency the independence issue is never far away at family gatherings.

“We talk about independence very often,” he said, adding that  he and his younger brothers and parents were split on the issue.

“Sometimes we end up shouting, but we have never fallen out. The atmosphere becomes heated and then it calms down and that's it. In my partner's family for example it is a totally taboo subject.”

Procesa Fernandez, 64, said the independence debate made her “hysterical”.

“If there is independence, I will flee!” she said before quickly acknowledging that she would not abandon everything she had built in Catalonia.

“Nothing to worry about, there are also disputes like those between a Real Madrid and a Barcelona supporter,” her son Rafael said.

“We are not going to stop talking to each other,” added her husband.

“Politics is one thing, family is another,” said her daughter Sonia.

By Daniel Bosque and Anna Cuenca