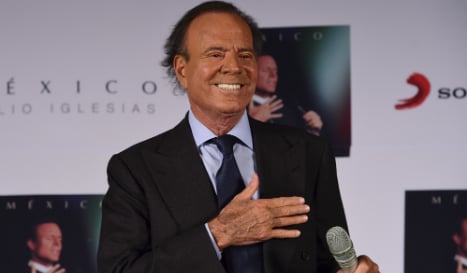 Presenting the album in Mexico City, Iglesias said that recording music in a studio is “complicated” and takes too much time.

“It is the last album I will record in a studio in my life,” Iglesias said at a news conference after he was serenaded with a birthday song by a mariachi band.

“My retirement from the studio is merely because I don't have a year and a half to spend in a studio, as the albums I do are long,” he said as he presented “Mexico,” which features 12 songs of Mexican flavor.

But Iglesias, whose son Enrique has enjoyed his own successful career, said he was not ready to give up the stage.

“I will not retire until I am forced out by life or the people,” he said.

Famous for his romantic ballads and love life that has garnered tabloid headlines, Iglesias is one of the biggest stars of Latin music, with 300 million albums sold in his decades-long career.

Iglesias successfully underwent a minor back surgery in June for an injury he suffered 52 years ago.