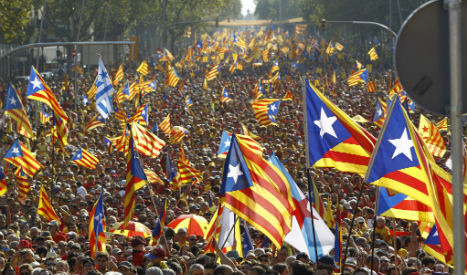 Nationalist leaders in Catalonia have vowed to declare independence within a year and a half if they win a majority of seats in the regional assembly on Sunday.

Two days after Catalonia's president Artur Mas urged Catalans to “give the finger” to their opponents and vote for independence, the central government hit back with grim warnings of what would happen to the wealthy northeastern region if it broke away.

“Some say that Catalan independence is the panacea that cures all ills, that it will generate jobs. All of that is not true,” Spain's Prime Minister Mariano Rajoy said during an interview with radio Onda Cero.

He also said he “did not know” if Catalans would be able to hold on to their Spanish citizenship if Catalonia became independent.

The prime minister ruled out dialogue with the Catalan government as some business leaders and opposition parties have urged.

He said any push by Catalan nationalists to break away from Spain after the regional elections “would have no legal value; we would obviously go to the Constitutional Court.”

Catalonia, a region of 7.5 million people which accounts for a fifth of Spain's economic output, has its own language which was suppressed during General Francisco Franco 1939-75 dictatorship.

The region's independence drive has intensified over the recent years of economic crisis. Catalans complain about how much of their tax money is redistributed to the rest of Spain.

Rajoy was raising the pressure further after Bank of Spain governor Luis Maria Linde on Monday warned an independent Catalonia would drop out of the eurozone and lose access to credit from the European Central Bank.

Spain's national press has raised the prospect of a bank deposit freeze while a top social security official has warned of possible problems with the payment of pensions.

Catalonia has roughly 1.7 million residents over the age of 60.

A similar warning on pensions was made in Scotland before its independence referendum last year which resulted in a “no” vote for separatists.

Mas, the Catalan president, has flexed the region's financial muscle to issue a warning of his own, saying an independent Catalonia might not pay its share of the public debt if Spain refused to do a deal.

“How would the state face its debt if there is no agreement for Catalonia to assume its part? The price of not reaching an agreement is terrible,” he told a rally on Monday.

Catalonia accounts for about a third of Spain's total debt.

Mas on Sunday urged voters to “give the finger” to Spain's ruling Popular Party and the main opposition Socialists by voting for his separatist list.

He accused the “big chiefs” of other parties of coming to the “Catalan reserve to tell the natives how to vote”.

The leader of the Socialists, Pedro Sanchez, on Tuesday blasted Mas's debt position as “irresponsible”, in a television interview.

Pilar Rahola, a columnist with daily Catalan newspaper La Vanguardia who backs independence, said scaremongering “does not work when a society has achieved maturity”.

“If all they have to offer are threats, catastrophes and terror, that means
they are really confounded and frightened,” she added.