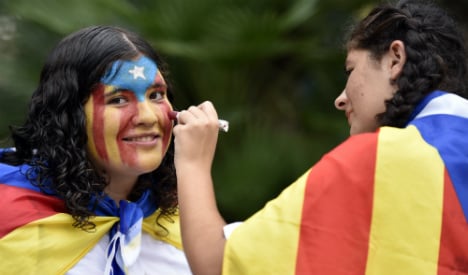 Nationalist leaders of the wealthy northeastern region have vowed to declare Catalonia independent within a year and a half if they win a majority of seats in the regional assembly in Sunday's polls.

Pro-independence leaders insist that should Catalonia secede, Catalans would be able to hold double Spanish-Catalan nationality as the constitution guarantees that no Spanish natives can have their nationality withdrawn.

“When we leave a country, it is evident that we abandon it with all the attributes that mean we are from this country,” Spain's Foreign Minister Jose Manuel Garcia-Margallo told reporters in Barcelona.

When Latin American countries declared independence from Spain, he said, “they lost Spanish nationality; when Algeria, which was a French province and was part of the European Economic Community, became independent, Algerians lost French nationality and European citizenship.”

The reality however is more nuanced.

An agreement struck between France and Algeria allowed for Algerians born before 1963, independence year, to keep their French nationality.

For residents of Cuba, a former colony of Spain which gained independence in 1898, there were also special provisions for those born in Spain.

Garcia-Margallo's comments came a day after Spanish Prime Minister Mariano Rajoy warned that an independent Catalonia would mean a loss of EU membership, and that any attempt to break away “would have no legal value”.

The foreign minister took the warning a step further Wednesday.

“They want an independent republic of 7.5 million citizens, but (they want) all of them to have Spanish nationality? It's a little absurd,” he said.

Artur Mas, Catalonia's pro-independence regional president, meanwhile told AFP: “If the Spanish state does not change the constitution, we will automatically have Spanish nationality.”

“So long as (Catalan) citizens have Spanish nationality, they will be citizens of the European Union,” he added.

Catalonia, which accounts for a fifth of Spain's economic output, has its own language which was suppressed during General Francisco Franco's 1939-75 dictatorship.

The region's independence drive has intensified over the recent years of economic crisis. Catalans complain about how much of their tax money is redistributed to the rest of Spain.