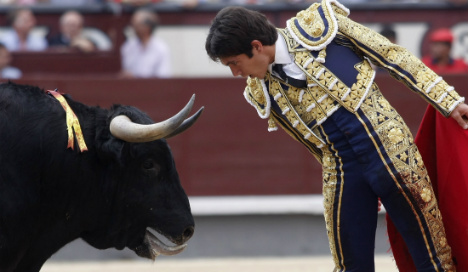 Madrid's bullfighting school will no longer be subsidized by the city hall. Photo: AFP

Madrid Culture and Sport Councillor, Celia Mayer, told the Marcial Lalanda bullfighting school,on Wednesday that it would no longer receive the €61,200 subsidy from the city’s council.

The subsidy was spent on classes, workshops and insurance for the prestigious school, which was founded in 1976 and has seen many of Spain’s most famous matadors pass through its doors.

“City Hall will stop subsidy to the Bullfighting School because it is incompatible with animal rights,” wrote left-wing coalition Ahora Madrid on its Twitter page.

Ahora Madrid, the left-wing coalition with which mayor Manuela Carmena swept to power in May, announced the plan via Twitter, writing that the activities of the school were “not compatible with the defending animal rights”.

A statement on the city hall's website added that the subsidy had also been disproportionate considering the school had only 38 pupils and there were many other cultural and sporting activities with a higher demand.

Madrid city hall will, however, pump €800,000 into renovating la Venta del Batán, where the school is based, with the idea of using the public space for other cultural and sporting activities.

The news will be welcomed by animal rights campaigners, whose calls for bullfighting to be banned have become more vocal in recent years.

This summer was the deadliest in 15 years, with 12 people gored to death by bulls.

The subsidy cut is just one of the many changes made by Carmena since she became mayor in May 2015.

She has shunned the usual trappings of the position, preferring to take the metro than use her official car, and giving up privileges such as the council's VIP box at Madrid's Las Ventas bullring in a bid to save money.