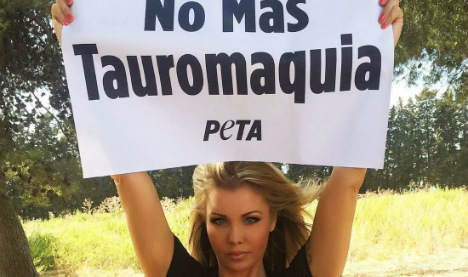 Amina Axelsson jumped over the barrier of La Malagueta bullring in Malaga and unfurled a banner that read “Stop bullfights!” before being removed from the bullring by one of the matadors.

“It was a symbolic act to show that we are thinking about the bull,” Axelsson told The Local by telephone on Tuesday during a break from a pole dancing class.

“No animal should have to endure an agonizing and unnecessary death for the enjoyment of a crowd,” said Axelsson, 41, who describes herself on Twitter as a Swedish stripper and adult model who lives with her husband in Marbella.

“I join together with Peta to urge all compassionate people to stop these cruel events, which have been condemned internationally, by never attending a bullfight,” the activist said.

Axelsson, who lives in Marbella, is no stranger to animal rights protests, having stripped and painted herself in fake animal blood during a bullfighting protest in Pamplona last year. She has also staged numerous protests in her native Sweden against the fur industry.

“The issue of animal rights is very different in Spain to Sweden,” she told The Local. “There are laws here in Spain but they are never policed, people just do what they want.”

While Axelsson has staged naked protests in the past, she decided against it this time, she told The Local.

“Spain should ban bullfighting, it is already banned in Catalonia and 80 percent of people are against it,” she said.

Axelsson was arrested after the protest but, she told The Local, the policeman was “fantastic”.

“He was also against bullfighting, he was definitely on my side,” she said.

Despite finding sympathy with the police, Axelsson faces a fine for her protest, the prospect of which does not worry her.

“They can prosecute or fine me, be my guest,” she said. “I’m still going to stand up for what I believe in.”

She is the second activist to jump into Malaga’s bullring – which dates back to 1876 and has been designated a “cultural asset of Spain” since the 1970s for its Neo-Mudejar, or Moorish-style, architecture.

In August Virginia Ruiz jumped into the ring and, unlike Axelsson, managed to approach the bull to comfort it as it lay dying on the ground.

“I wanted to give him love before he left this world,” Ruiz told Spanish television station Telecinco following the event.

In a statement released in Spain on Monday, Mimi Bekhechi, the director of Peta UK, slammed the bullfighting practices including “subjecting the animal to electric shocks” and “tranquilizing” the bulls before the corridas.

The animal rights charity also warned that 12 people had died after being gored by bulls in July and August, making 2015 the deadliest summer in 15 years.

Nearly 16,000 town festivals included bull events this summer, which have drawn fierce criticism from animal rights activists both in Spain and abroad