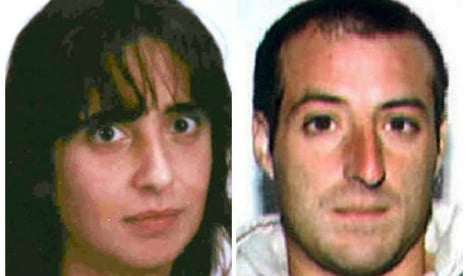 The arrests of Eta members David Pla, 40, and Iratxe Sorzábal, 43, “completes the decapitation of Eta”, minister Jorge Fernandez Diaz told reporters as he arrived for a meeting in Brussels.

He described the pair as Spain's “currently two most wanted terrorists”.

The two fugitives were detained at a farmhouse in Saint-Étienne-de-Baïgorry in the French Pyrenees in a joint operation between Spain's Civil Guard and French domestic security agency, the DGSI.

“The arrests have dealt a crushing blow to the terrorist group dismantling the leadership responsible for managing the arsenal of weapons and explosives that Eta still has,” read a statement from the Interior Ministry.

“The two were the current leaders of Eta and their arrests have not only left the terrorist group without leadership but also weakens the entire terrorist organization.”

False documents and weapons were also found in the operation.

Pla, who had once been chosen to represent the banned political wing of Eta, Herri Batasuna, had been on the run since 2010.

Sorzábal is alleged to have been a part of the Ibarla commando unit, a group that is blamed for planning more than 20 terrorist attacks between 1994 and 1997 and caused the death of two police officers.

A fugitive since 2001, she also accused of being the leader behind the murder of two Civil Guard in Capbreton in December 2007.

Spanish Prime Minister Mariano Rajoy welcomed the arrests and said on Twitter: “There is only one course for ETA: its unconditional disbandment.”